Is the Super Bowl Empty? 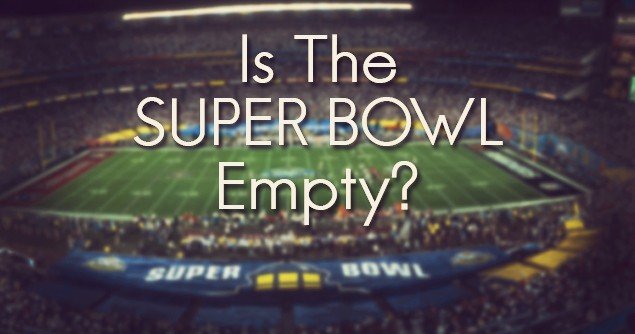 Is the Super Bowl Empty?

I’m a writer and the shy bookish type. I watch one football game a year, the Super Bowl, and most of the time I only pay attention to the advertising. But football did not become America’s favorite sport because of the Clydesdales, puppies, and babies in its commercials. It is honest, intelligent, courageous, competition and even the most docile, bibliophilic, couch potato can respect that.

Ten years ago, Justin Timberlake and Janet Jackson, performed a Super Bowl Halftime Show where an unsuspecting family audience was exposed to what is now commonly called, “a wardrobe malfunction.” Anyone who saw it and remembers knows it was no accident. Everything in that performance went as planned and at the end a woman’s breast was exposed.

America’s outrage reverberated for weeks afterwards. The fall out was bad, but what was worse was that many people in the television and entertainment industry were clueless to understand why! The morally bereft of the entertainment industry fell back on the usual rhetoric to explain why Super Bowl XXXVIII received more than one million complaints.

Miscommunication backpedaling: Someone in camp A didn’t get a message to someone in camp B so the whole thing was an unintentional accident.

The Official “Legaleez” Agenda – FCC issued almost $8,000,000 in fines because laws and statutes X, Y and Z were violated.

The Feminist Agenda – It was the woman who was punished (and indeed she was). Janet Jackson’s career never recovered and Justin Timberlake who actually committed the act was praised.

In all the commotion the family agenda was drowned in a sea of opinions, excuses, and rants.

Don’t you know that American sports is the last place on TV where a family can all sit and watch something together?

So why am I bringing this up ten years later when we would all rather just put it behind us and forget it? Here’s why.

The families are right. As movies and television becomes less family oriented and more alternative family oriented there are fewer and fewer outlets for the traditional family to find entertainment. Sports are one of the last, and therefore for some strange reason it has become a target. Only today, in 2015, the attack is much more subtle.

A few years ago Esquire network premiered a TV show called “Friday Night Tykes,” a reality documentary series similar to “Dance Moms,” and “Toddlers in Tiaras” about the rough and often abusive road that families put their children on to pursue the possibility of future stardom. That is, in the case of Friday Night Tykes, if the child does not receive permanent brain damage from a concussion first. Is it child abuse? Or, just what you have to do give your child the best opportunity possible to play pro football one day? Furthermore, on Christmas Day 2015, Will Smith’s latest movie “Concussion” will hit the theaters. And when concerned non-fans (like myself) question the wisdom of the Super Bowl pursuit, we always get the same answer, “Hey man, its football. That’s just how it is.”

It’s enough to make you ashamed of yourself or someone else for liking the sport.

Football is a dangerous sport. It always has been, and the players know this when they sign up. If we can make it safer for the players, then by all means let’s do so.

Little by little, the media is subtly infusing two emotional weapons that it has frequently accused the church of using, guilt and fear, to change how spectators perceive professional sports. Even those outside the football fan base can feel the winds of change kicking up.

The point that the cynics are trying to drive home is that the television you think is family friendly isn’t all that great. If that so-called family programming isn’t as great as you thought it was, well then, where does one turn? To family television under the new definition of family. If they can turn us away from family media to their media families how long will it be before good Christians turn away from God and his ways?