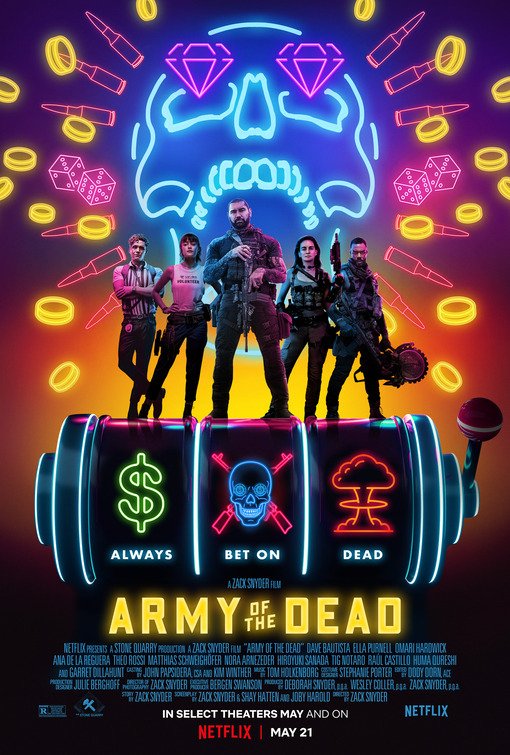 ARMY OF THE DEAD opens with some super-fast, dangerous zombies escaping from the American military and attacking Las Vegas. A few weeks later, Vegas is overrun by zombies and blocked off from the country. A mysterious Japanese businessman approaches Scott Ward, a former special ops soldier. He wants Ward to assemble a team of ace safecrackers and a helicopter pilot to enter Vegas, break into an underground vault holding $200 million, and, for a share of the loot, escape with the cash by helicopter. They only have four days to do it before the Pentagon explodes a nuclear bomb to kill all the zombies.

ARMY OF THE DEAD is half an hour too long at 148 minutes. Despite this, the movie is surprisingly entertaining, with a subplot about the main character reconciling with his daughter. However, ARMY OF THE DEAD is a movie for adults only. In addition to grotesque special effects and graphic violence, there’s a constant stream of strong foul language, plus scenes with topless female zombies. The negative content in ARMY OF THE DEAD is decidedly excessive, having a strong pagan worldview.

(PaPa, B, LLL, VVV, S, NN, A, MM):
Dominant Worldview and Other Worldview Content/Elements:
Strong pagan worldview about a group of mercenaries trying to grab some money in a Las Vegas which has been overrun by zombies, with a positive subplot about a father-daughter reconciliation
Foul Language:
At least 148 obscenities (including many ‘f” words) and 60 mostly strong profanities
Violence:
Lots of graphic, bloody violence includes hand-to-hand combat, exploding heads from gunshots as people shoot zombies in the brain to kill them, constant shootouts, constant chomping by zombies of people, many scenes of hordes of zombies chasing individual humans and of humans fighting or shooting back at the zombies, and a nuclear missile is detonated
Sex:
Implied, unseen oral sex by a bride on her new husband while he’s driving and a man in a hot tub with multiple women is attacked when the women turn into zombies
Nudity:
Topless women turn into zombies, multiple sets of breasts are shown prominently, as zombified topless women chase men in a hallway or attack a man in a hot tub
Alcohol Use:
Some alcohol use
Smoking and/or Drug Use and Abuse:
No smoking or drugs; and,
Miscellaneous Immorality:
The entire movie’s premise is built on a heist, with criminals as some of the “heroes,” plus some of the criminals betray and double cross others over millions of dollars.

A combination of zombie horror movie and heist thriller, ARMY OF THE DEAD is a wildly audacious movie that will be highly entertaining to those who know what to expect and watch anyway, and deeply offensive to everyone else. The movie follows a ragtag team of criminals and daredevils led by a war hero as they try to steal $200 million from an underground vault beneath a Las Vegas casino with a deadly clock ticking – as they have to get the money and escape Vegas before a nuclear bomb is sent by the Pentagon to destroy Sin City because it’s been overwhelmed by a plague of zombies.

That crazy plot description is fun to write, and, completely divorced from examining it on a moral or spiritual level, the movie is unexpectedly entertaining. Right off the bat, it has opening credits that preview the often tongue-in-cheek yet highly graphic mayhem that runs rampant throughout the movie, setting it against a lounge-singer rendition of “Viva Las Vegas.” Throughout, oddball cover-music choices of rock and pop classics abound to create a highly entertaining soundtrack accompanying the mayhem.

The movie rockets through a crazy opening where a military caravan is hurtling mysterious yet highly dangerous cargo through the Nevada desert in the dead of night. At the same time, a newly married-in-Vegas couple is racing down the freeway, with the bride performing an unseen sex act on her husband while he’s driving. He swerves into the caravan, which sets off a massive explosion that tosses out the cargo, a sealed container housing super-fast, highly dangerous zombies. Within minutes, all the soldiers are killed, and the zombies are about to attack Vegas.

Jumping forward a few weeks in time, Vegas is a hopeless disaster, with most humans evacuated into far-away FEMA camps and the city walled off to keep the zombies who’ve utterly dominated Vegas inside. Only a few regular humans are left hiding inside.

A mysterious Japanese businessman named Mr. Tanaka approaches a former special ops soldier named Scott Ward (Dave Bautista) with an unusual offer. Tanaka wants Ward to round up a team of ace safecrackers and a helicopter pilot to break into Las Vegas, find $200 million in a vault under a casino, break in and steal the money, then escape with the cash by helicopter. If they pull it off, the team will split $50 million of the $200 million.

The problem is, they must pull off this already-improbable feat with the clock ticking against them because in 96 hours the US government will send a low-grade nuclear weapon to decimate Vegas and kill all the zombies for good. Ward has to recruit the men, hatch the plan to retrieve the money, get the money, and get out of the range of the nuclear missile within those four short days. Can they do it, all the while fighting off thousands of rampaging zombies that want to chomp them and tear them limb from limb?

ARMY OF THE DEAD marks the comeback of director Zack Snyder, who made the reboot DAWN OF THE DEAD in 2004 before directing a series of DC comic-book movies including MAN OF STEEL, BATMAN VS. SUPERMAN and the original version of JUSTICE LEAGUE. Snyder’s movies are always overlong (way over two hours) and sometimes suck the fun out of comic book movies. This movie is about a half hour too long at 148 minutes. Despite that, ARMY OF THE DEAD is surprisingly entertaining, with a subplot about the main character reconciling with his daughter.

However, it can’t be stressed enough that ARMY OF THE DEAD is absolutely a movie for adults. Zombie movies by their very nature are packed with grotesque special effects and graphic violence as thousands of decomposing zombified people roam the earth looking for regular humans to take huge chomping bites from them. Add in a profusion of profanity and obscenities throughout the movie as the heroes frequently cuss while engaged in battles and chases with the zombies, along with few quick scenes of topless female zombies, and this is a very hard-R movie. The negative content in ARMY OF THE DEAD is decidedly excessive, with a strong pagan worldview about getting money by hook or by crook.