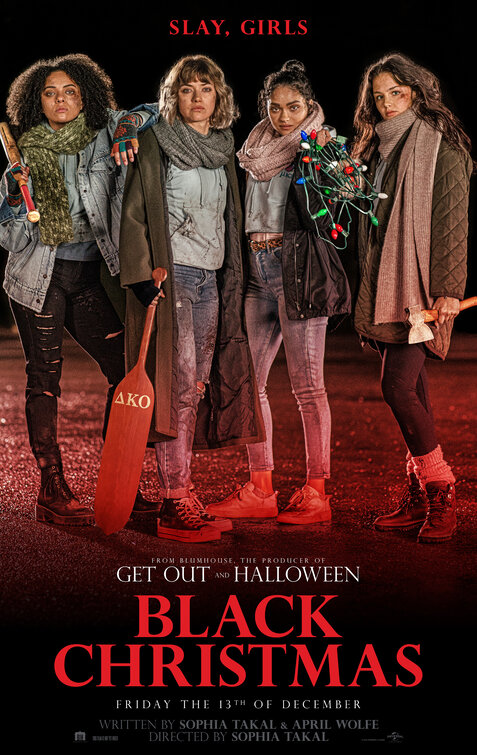 BLACK CHRISTMAS is the second remake of a 1974 horror thriller centered on a group of sorority sisters at a fictional college during Christmas break. The young women receive cryptic direct messages via an unknown person claiming to be the university’s dead founder. Meanwhile, two of their sisters are secretly murdered by this mysterious person, who wears a hood and mask when he kills the women. Eventually, the women discover that the murders are actually being committed by an occult, sexist cabal of fraternity brothers.

BLACK CHRISTMAS follows many conventional horror thriller conventions. It pays homage to previous similar movies like PSYCHO, SCREAM and the original BLACK CHRISTMAS. However, the script is almost laughable at times. Also, the movie has a strong Romantic, politically correct, feminist worldview where white men are the villains because they’ve only oppressed and abused women and other diverse groups of people for centuries. In addition, BLACK CHRISTMAS has too much foul language, some intense horror violence and underage drinking. So, despite some positive elements about friendship and protecting other people, MOVIEGUIDE® finds BLACK CHRISTMAS excessive and unacceptable.

(RoRoRo, PCPCPC, FeFeFe, O, B, C, LLL, VV, SS, N, AA, DD, M):
Dominant Worldview and Other Worldview Content/Elements:
Very strong Romantic, politically correct, feminist worldview where men are seen as predators, the enemy and oppressors (only two of the male characters are shown as sympathetic), one radical feminist character talks about the allegedly age-old oppression of “the marginalized” but comes across as blunt and overzealous, movie has a politically correct and left-leaning attitude about “diversity,” occult elements where the villains perform occult rituals to pledge into a fraternity, but this leads them to inflict harm on others, and they are clearly evil, some moral elements stress the importance of friendship and rescuing those in need while also condemning abuse of many different kinds, a Christian nativity is briefly depicted, plus one male student complains at one point that all the negative talk about men just discourages good men from being motivated, and a Jewish female character decorates a Jewish menorah in the sorority house but also uses it to fight back against the male villains
Foul Language:
At least, 15 obscenities (mainly “h” words and “s” words), and, at least, 14 strong and light profanities
Violence:
Strong intense violence includes rape mentioned and partially depicted in flashbacks but not as graphic as it could be, villains choke one another, villains shoot arrows at victims, villains stab and cut victims faces, villains stalk and attack victims to the point of death, and women fight off their attacks by various means, including turning the arrows against them
Sex:
A rape is partially depicted in flashbacks, unmarried male and female character almost have intercourse sex but get interrupted because she’s not in her right mind, female character asks for a Diva Cup for her menstrual cycle and puts it in her genital area through her jeans
Nudity:
Upper male nudity
Alcohol Use:
Characters drink beer, cocktails and wine throughout and since the characters are college-aged not all of them are probably 21, drunkenness depicted and not necessarily rebuked, but a female character in one scene doesn’t let her drunk friend have sexual relations in her drunken state
Smoking and/or Drug Use and Abuse:
No smoking or drugs, but there’s dialogue where a character remember being drugged and then sexually abused; and,
Miscellaneous Immorality:
Name-calling, character jokingly threatens to kill someone, intentional malice, revenge, fraternity boys haze one another, uncontrollable anger.

BLACK CHRISTMAS is the second remake of a 1974 horror thriller about a group of sorority sisters stalked by a hooded serial killer, who tuns out to be part of a secret occult cabal of evil white men who think women are beneath them. BLACK CHRISTMAS follows many conventional horror thriller conventions and contains some moral elements a promoting friendship and rescuing other people from evil, but it has a strong Romantic, politically correct, feminist worldview with excessive foul language, intense horror violence and some underage drinking.

The movie begins with a quote from Calvin Hawthorne, the fictional founder of a fictional university, about other worldly power. Cut to a female college student, Lindsey, at Hawthorne University. Lindsey walks out of her sorority house during a cold winter evening. Lindsey gets direct messages from a “Calvin Hawthorne” and starts to walk faster as she feels someone watching her. Lindsey gets more frightened in the streets but finds no help. Instead, a hooded figure wearing a mask stabs her with an icicle, and she dies, leaving behind an eerie snow angel.

Cut to the sorority house. Riley, the movie’s protagonist, heads out the door to her last class of the semester while greeting her friends. During class, Professor Gelson reveals there’s a petition circulating around the school to have him fired for not including more diverse authors in his curriculum. Riley leaves the class only to find her friend, Kris, circulating the petition.

Riley works at a coffee shop and strikes up a conversation with Landon, a young man who fancies her. Later that evening, Riley’s friends prepare to perform at a fraternity party. Riley searches for the fourth member of the singing group and stumbles upon some of the frat as they have some sort of ritual ceremony that resembles a séance. Oddly, the bust of Calvin Hawthrone is in the room with the men.

As Riley continues through the house, she finds her friend, Helena, who’s almost having sexual relations with a frat member. Yet, Riley can see she’s not in her right mind. Helena is drunk and vomits. Then, Riley takes her place in the female quartet, but there’s one problem. A man who sexually abused her three years ago is in the audience.

Next, the group sings “Up on the Housetop,” and Riley remixes the song to include heavy innuendo that her abuser is present. As the group leaves the party, Landon applauds Riley and schedules a date with her the next night.

The next morning, Riley notices that Lindsey hasn’t made it home and goes to campus security to file a report. The guard obliges her request after some pushback, but nothing comes of it. Riley goes to check in at the frat house and learns from Professor Gelson, who’s watching the house for break, that Kris posted a video of their performance online, and it’s gaining traction with viewers.

That evening, Riley and her female friends, Kris, Jesse, Marty, plus Marty’s boyfriend, start dinner. Shortly afterwards, a brief argument erupts about the video. Jesse tries to avoid the confrontation by going upstairs, but meets her demise by the same hooded figure that killed Lindsey, and her friends don’t know.

Next, Marty’s boyfriend storms out of the room house because he’s sick of hearing about how males are the villain in almost everyone situation, according to the young ladies. However, a masked figure lurks in the house and forces them to fight for their lives.

Now, the women are convinced that nothing will go right this Christmas season.

BLACK CHRISTMAS follows many conventional horror thriller conventions such as sound cues when something bad is about to happen, close ups of characters and zoom shots that distorts the audience. One could also say that BLACK CHRISTMAS nods to other horrors movies with similar shots from PSYCHO (1960) and SCREAM (1996). The script, though, is almost laughable at times.

Sadly, BLACK CHRISTMAS uses the Christmas season for its overt politically correct worldview where white men have oppressed and abused women and other diverse groups of people. The movie takes a politically correct, left-leaning approach toward “diversity.” Anyone who opposes this approach is a real villain. The movie also showcases a heavy feminist worldview. One woman in particular champions those she believes to be marginalized and finds herself repulsed by any semblance of a “patriarchy.” Eventually, the women discover that the murders are part of an occult, sexist cabal of white fraternity brothers led by a mysterious villain. Positively, though, there are two male characters in BLACK CHRISTMAS who show that, in fact, not all men are evil. One of these men even complains at one point that all the negative talk about men just discourages good men from being motivated. Sadly, the writing of the movie only plays off the Christmas season, and the great majority of the movie’s male characters think women are beneath them. Thankfully, though, BLACK CHRISTMAS also rightly condemns sexual abuse.

BLACK CHRISTMAS doesn’t refer to Satan but does draw on occultism for its villains in the movie. The movie also has a fair amount of violence and foul language, with many profanities throughout it.

The only other worthwhile element of BLACK CHRISTMAS is friendship. The ladies in the sorority fight on behalf of saving one another. Also, one character compares friendship to ants, who are able to withstand a lot of pressure in unity. BLACK CHRISTMAS does, by nature of the season show a Nativity display in someone’s front yard, but that’s the extent of the movie’s Christian content. In a couple scenes, there’s a Jewish character, and she even uses a menorah as a literal weapon to fight off evil. Otherwise, however, BLACK CHRISTMAS has too much objectionable content. So, MOVIEGUIDE® ultimately finds BLACK CHRISTMAS excessive and unacceptable.