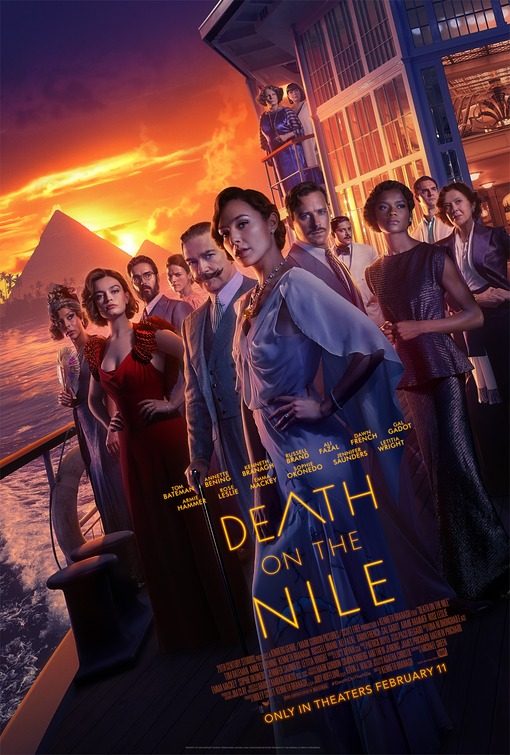 DEATH ON THE NILE is the second movie version of an Agatha Christie mystery. Belgian sleuth Hercule Poirot’s Egyptian vacation aboard a river steamer is interrupted when a rich heiress, Linnet Ridgeway Doyle, tells him she’s afraid of nearly everyone in her wedding party on the boat. Linnet married her best friend, Jackie’s, fiancé, a handsome man named Simon Doyle. Now, Jackie’s stalking the couple, trying to steal back Simon. When Linnet turns up dead, Jackie appears to have a water-tight alibi. So, Poirot’s suspicions fall on the members of Linnet’s wedding party. They include Linnet’s godmother and her nurse, Linnet’s finance manager, a jazz singer’s daughter whom Linnet knew in college, and a doctor who’s one of Linnet’s former suitors.

DEATH ON THE NILE is a crackerjack mystery. It has one of the more startling whodunnit solutions in the work of the amazing Agatha Christie. The movie has a light moral worldview. However, it tells an atmospheric tale set in a tragic world of murder, jealousy, greed, and passion. So, DEATH ON THE NILE’s story is sad rather than fun and uplifting.

(B, Co, Ho, LL, VV, S, A, D, MM):
Dominant Worldview and Other Worldview Content/Elements:
Light moral worldview but set in a dark, tragic world of murder, jealousy, greed, revenge, and uncontrolled passion, plus a middle-aged woman advocates communism in public, but it turns out she’s a hypocrite about it (she likes money), and a middle-aged woman confesses that she and her middle-aged “nurse” have had a long lesbian relationship
Foul Language:
Nine or 10 obscenities (mostly “d” or “h” words), one GD profanity and six light exclamatory profanities
Violence:
Strong scenes of violence include some war scenes of soldiers in World War I storming a German trench, a bomb explodes and soldier suffers serious bloody wounds on his lower right cheek and right upper lip, multiple murders occur, large boulder narrowly misses a married couple standing on a ledge at a massive Egyptian archeological site, woman shoots man in the knee, woman found shot in her temple, murderer slashes woman’s throat off screen and blood sprays nearby wall on a boat, man shot dead, and two other people are shot dead
Sex:
Woman brags to her rich friend at a nightclub that she and her fiancé have lots of sex, but her fiancé suggestively dances with the rich friend at the nightclub in front of her, and her rich friend eventually steals fiancé away from her and marries him
Nudity:
No nudity
Alcohol Use:
Some alcohol use in several scenes
Smoking and/or Drug Use and Abuse:
Smoking and no illegal drugs, but a distraught woman is given a sedative, and a man is drugged to knock him out and get him out of the way during the planned commission of a crime; and,
Miscellaneous Immorality:
Greed, jealousy, embezzlement, some trickery and deception, stalking, hypocrisy, uncontrolled passion.

DEATH ON THE NILE is a remake of an Agatha Christie mystery novel where her most famous detective, Hercule Poirot, tries to help a wealthy, beautiful young married woman on an Egyptian cruise down the Nile, who feels her life’s in danger from a former friend, relatives, employees, and a former lover. DEATH ON THE NILE is a crackerjack mystery, but it’s set in a dark, tragic world of murder, jealousy, greed, and uncontrolled passion, so its story is more sad than fun and uplifting.

The movie begins during World War I in the trenches. A French-Belgian brigade is ordered to attack the Germans, but the men believe it’s a suicidal assault. However, one of the soldiers, Hercule Poirot has been noticing the wind shifting by studying the birds flying around the encampment. He believes if they attack now instead of later, they can surprise the Germans and avoid the effects of the gas attack that will surely come. Poirot’s plan turns out to be correct, but during the fighting, a bomb explodes nearby, and he suffers a serious, disfiguring wound on the bottom part of his right cheek and right side of his upper lip.

In the hospital, Poirot’s nurse, Katherine, turns out to be his girlfriend. He thinks, because of the wounds on his face, that Katherine will no longer love him or want to get married, but she disabuses him of that notion. She tells him he can grow a moustache.

Twenty-three years later, in 1937, Poirot, bearing a ridiculous moustache over his upper lip, is visiting a nightclub in London. He knowingly watches a rich heiress, Linnet Ridgeway, meet her friend, Jackie. Jackie introduces Linnet to her fiancé, Simon Doyle, after he enters the nightclub. Simon asks Linnet to dance, and they do an incredibly suggestive dance to the bluesy number that a black singer named Salome performs with the band.

Several months later, Poirot visits the great pyramids at Giza, Egypt. He spies a young friend, Bouc, trying to fly a kite while standing on the steps of the biggest pyramid while Bouc’s mother paints the scene. Poirot learns that Bouc and his mother are part of a wedding party for Simon Doyle, who ended up marrying Linnet instead of Jackie. He also learns that Jackie has been following the married couple everywhere, making a nuisance of herself and trying to win back Simon.

Simon and Linnet want to hire Poirot to deter Jackie from hounding and stalking the happily married couple. Poirot refuses to take the commission, but he privately tries to dissuade Jackie from pursuing Simon and Linnet, because nothing good can come from it. Jackie is undeterred, however, and carries a .22mm pistol in her purse.

Poirot advises them to go home to England, but Simon books a boat cruise to take the wedding party down the Nile. When they get on the boat, however, they learn that Jackie has learned about the trip and booked a cabin on the boat. Meanwhile, Linnet privately tells Poirot she doesn’t trust anyone on the boat, not just Jackie. The wedding party not only includes Poirot’s friend, Bouc, and his mother, but also the black blues singer and her daughter, Linnet’s communist godmother and nurse, Linnet’s business manager, and a young doctor who used to be one of Linnet’s suitors before she met Simon.

The boat makes a stop at the two massive rock-cut Egyptian temples at Abu Semple. While Linnet and Simon enjoy a romantic moment on a ledge above the four large statues of Ramses II flanking the entrance to the main temple, a large boulder comes crashing down from above, narrowly missing them. Jackie is suspected of pushing the boulder off the cliff above, but she’s discovered to have been aboard the boat at the time.

That night, the black blues singer, Simone, performs for the wedding party. Linnet develops a headache and goes to bed early, as does Poirot and the older guests. Jackie grows increasingly angry at Simon and eventually pulls put her pistol and points it at Simon. She can’t quite bring herself to kill him, however, but she hits him in the knee and collapses. The others, including the doctor, rush off to take Jackie to find the godmother’s nurse to give the hysterical Jackie a sedative. The nurse promises to stay with her through the night, and the others return to the salon to tend to Simon’s wound.

After Simon’s wound is dressed and a drink administered, they take him back to his stateroom, where they find Linnet has been shot dead in her temple. They search for Jackie’s pistol in the salon, but they can’t find it. Also missing is an expensive jewel necklace Linnet wore.

However, Detective Hercule Poirot is on the case. Sooner or later, he’s going to figure out whodunnit, but not before more murder and tragedy take place.

This movie is the third full-length version of Agatha Christie’s novel DEATH ON THE NILE, which was released in 1978 as a theatrical movie and in 2004 as a TV episode in a series that aired on PBS-TV. Starring Kenneth Branagh as the Belgian detective (who also directed), the new movie is a darker, more tragic version than the 1978 movie, which starred Peter Ustinov as Poirot. It tells an atmospheric tale of murder, jealousy, greed, revenge, and uncontrolled passion. Brannagh’s direction is sumptuous and smoothly paced, with plenty of room for the actors to excel.

DEATH ON THE NILE has a light moral worldview, but the morality of exposing and catching the killer is overshadowed by the tragic circumstances of the murders committed. The tragedy is later enhanced when Poirot reveals in the middle of the movie that his bride-to-be, Katherine, was killed when a bomb struck the hospital where she was administering to Poirot and the other wounded soldiers. This revealed fact leads to an ending that’s more sad than fun and uplifting. That said, DEATH ON THE NILE is a crackerjack mystery, with one of the more startling whodunnit solutions in the work of the amazing Agatha Christie, the grande dame of detective fiction.

MOVIEGUIDE® advises strong or extreme caution for DEATH ON THE NILE for its scenes of violence and murder, suggestive dancing, some foul language, and mature themes. Please see our CONTENT section for more details.