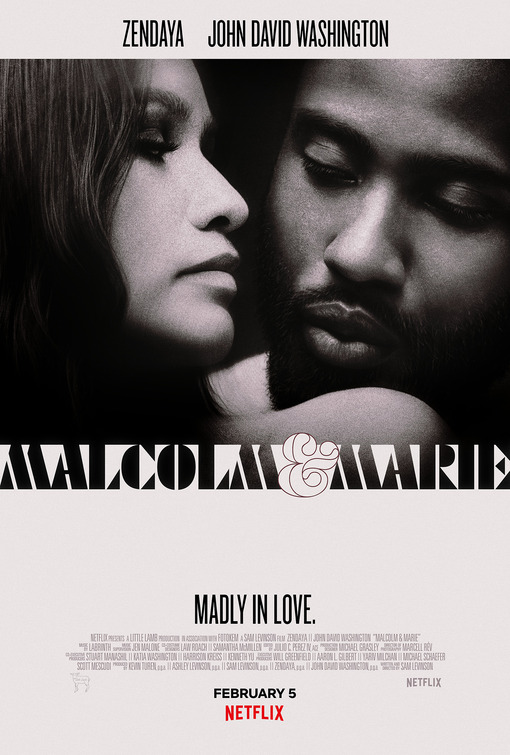 MALCOLM & MARIE follows a director and his girlfriend after they return home from a celebratory movie premiere. As Malcolm awaits critical reviews, tensions rise between him and Marie. He wants to celebrate his success, but she’s bothered by the movie and the premiere event, where he neglected her contribution. However, when they start to discuss the night’s events, things escalate. One simple argument begins to uncover a myriad of emotional revelations that will test the strength of their love.

Watching MALCOLM & MARIE is exhausting. Aside from the stunning black and white cinematography, the movie is forced to rely on the two actors’ chemistry and the script. While the performances are compelling, the script is rife with monologues about politics, Hollywood narcissism and movie critics. This dialogue does little to flesh out the only two characters in the whole movie. Also, the dialogue-heavy drama, which tries to explore the tensions of art, life and love, has little meaningful to say about anything. MALCOLM & MARIE also contains nearly constant foul language. So, MOVIEGUIDE® finds the movie excessively immoral and ultimately unwatchable.

(PaPa, B, LLL, V, S, N, A, DD):
Dominant Worldview and Other Worldview Content/Elements:
Strong, slightly mixed pagan worldview where a person’s worth is based on their successes and failures, love is extolled but viewed through a flawed lens, and the movie does briefly call out narcissism and hypocrisy in Hollywood and the media as well as the tendency to over politicize movies, but signs of any moral lessons are overshadowed
Foul Language:
More than 250 “f” words, more than 70 “s” words, a couple uses of racial slurs, other strong language including three uses of the c-word, and other mild language sprinkled throughout, about ten profanities, including the use of JC and GD, plus a woman is seen urinating
Violence:
A women menacingly brandishes a knife, but it is later revealed she was acting, there is a lot of conversation around suicide and cutting wrists, and there is also mention of a drug overdose, but there’s no actual depicted violence
Sex:
A man kisses a woman in sexual areas over her clothes, a few scenes of passionate kissing, the couple isn’t is not married, cheating and fornication are talked about flippantly
Nudity:
Upper male nudity, a woman undresses (only her back and underwear are shown), a woman wears a revealing top and underwear for over half the movie
Alcohol Use:
Brief alcohol consumption in a home
Smoking and/or Drug Use and Abuse:
There are a lot of conversations about drug abuse and overdosing, plus a girl mentions anti-depressants; and,
Miscellaneous Immorality:
Nothing else objectionable.

In MALCOLM & MARIE, a director and his girlfriend, come home after the premiere of his movie, but tensions between the couple escalate, and their relationship is tested. MALCOLM & MARIE is an exhausting drama forced to rely on the two actors’ chemistry and the script, but the movie has little meaningful to say and contains nearly constant foul language.

The movie opens as Malcolm (John David Washington) returns from his movie’s premiere event with his girlfriend, Marie (Zendaya). Malcolm is elated at the possibility of the movie’s success and the audience’s positive reaction to his tragic story about a drug addict.

While Malcolm celebrates, Marie stews over the night’s events. Eventually, Malcolm notices she’s frustrated, and the couple begins to argue about his casting choices and speech. To Marie’s dismay, Malcolm has never thanked her for the positive role she plays in his life.

Malcolm claims that it was an honest mistake, but the initial argument uncovers deeper emotions toward each other. It’s revealed that Marie was also a drug addict when Malcolm met her, and that she has recovered. Marie believes Malcolm based the main character on her, and she deserves a thank you.

The arguing escalates and reveals that Marie’s disappointment, frustration and Malcolm’s speech is really just the tip of the iceberg. As the couple argues through their feelings towards each other, more and more is revealed about their perspective on art, life and ultimately each other. Will their relationship last the night?

MALCOLM & MARIE is an exhausting romantic drama that, aside from the stunning black and white cinematography, is forced to rely on the two actors’ chemistry and the script. While the performances are compelling, the script is rife with monologues about politics, Hollywood narcissism, and movie critics. This dialogues does little to flesh out the only two characters in the whole movie (regardless of the truth or inaccuracy of the message). Sadly, the dialogue-heavy drama, which tries to explore the tensions of art, life and love, has little meaningful to say about anything. MALCOLM & MARIE also contains nearly constant foul language. So, MOVIEGUIDE® finds the movie excessively immoral and ultimately unwatchable.