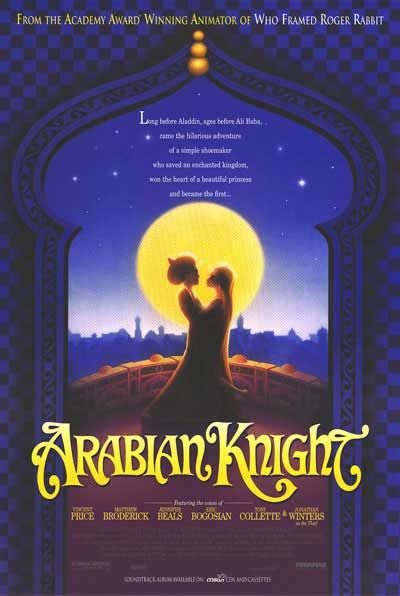 ARABIAN KNIGHT is a very poor sister of ALADDIN in every category. Having no theme nor purpose, this film is also immoral. Peppered with inappropriate scatological humor, it uses magic for no redeeming purpose while telling the tale of a cobbler turned crusader who saves his city from attack.

ARABIAN KNIGHT is a very poor sister of ALADDIN in every way. Tack is a cobbler living in the Golden City. When he accidently drops a tack under the foot of the royal vizier, Zigzag, he gets thrown into the prison. There, the princess Yum-yum rescues him by making him her personal cobbler. Meanwhile, an invincible war-machine called the one-eyes prepares for an imminent invasion of the city, and a slinky thief steals three golden balls atop a city spire. Zigzag, however, intercepts the balls and cavorts with the ensuing one-eyes. The portly and worrisome king begins to cry, but Yum-yum and Tack agree to venture outside the city to solicit the help of a good witch. If the viewer is able to endure to the end, he will discover the balls are returned, the city is saved, the Vizier is punished, and Tack and Yum-yum marry.

Although a very small amount of the animation is clever and original, much of the animation of ARABIAN KNIGHT is old-fashioned and washed-out. The filmmakers worked on the film for over 20 years during their spare time, and it shows. There is no uniformity in standards, nor is there a cohesive visual style. Having no theme nor purpose, this film is also immoral. Peppered with inappropriate scatological humor, it also uses magic for no redeeming purposes.