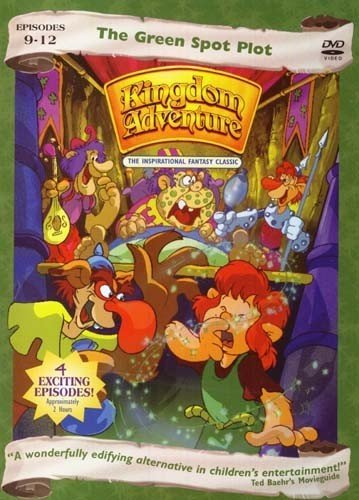 KINGDOM ADVENTURES contain both an allegorically Christian universe, and individual plots which are adapted directly from Bible stories. Using a seamless combination of animation and puppets, KINGDOM ADVENTURES are both entertaining and instructive, presenting the truths of God's Word with vivid clarity.

(B, C) KINGDOM ADVENTURES contain both an allegorically Christian universe (currently ruled by temporal evil, but under the ultimate control of a benevolent unseen Emperor, whose son the Prince was murdered and rose from the dead), and individual plots which are adapted directly from Bible stories.

Tyndale Family Video’s delightful KINGDOM ADVENTURES are a wonderfully edifying alternative in children`s entertainment. The videos include parent’s guides which include plot synopses, song lyrics and scripture references to aid parents in sharing the biblical messages with their children. The individual episodes of KINGDOM ADVENTURES present Bible stories adapted to fit the land of Lumia. In TRAMBAZOOMBAH RESCUE, Pops is instructed to build a “trambazoombah” out of Zoombah branches and Teekoh roots. Pops begins to build despite the ridicule, questions and opposition of fellow Lumans. As the events unfold, the story teaches the importance of being sensitive to God’s voice and obeying Him even if we don`t quite understand His plan. THE GREEN SPOT PLOT offers a take on the book of Job. Zordock challenges the Prince to remove his hedge of protection from Pokum to test his faith. Pokum holds fast to his faith, and Zordock is thwarted. @@@KINGDOM ADVENTURES uses a seamless combination of puppets and animation to create the marvelous land of Lumia. Generally, flying creatures such as birds and butterflies are rendered with animation, which give them a magical quality. The Lumans look like medieval Muppets, and the live-action feel of the puppets give them much more personality than could have been achieved with straight animation. KINGDOM ADVENTURES are both entertaining and instructive, presenting the truths of God’s Word with vivid clarity.