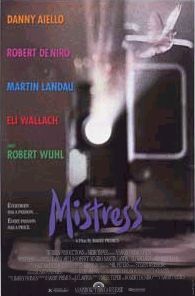 MISTRESS is the story of frustrated screenwriter/director Marvin Landisman (Robert Wuhl), who descends into a comic hell of artistic compromise as each of his potential financial backers insists on including their girlfriends in his film. This Hollywood comedy of errors is unfortunately marred by several obscenities and profanities, adultery, unlikable characters, and an anti-marriage message.

MISTRESS is the story of frustrated director Marvin Landisman, who struggles to produce THE DARKNESS AND THE LIGHT, his magnum opus on artistic compromise. Aided by Jack Roth (Martin Landau) and screenwriter Stuart Stratland, Marvin descends into a comic hell of compromise as each of his potential financial backers attempts to work their girlfriends into the story. The first is George (Eli Wallach), who insists that his young girlfriend Peggy gets the starring role. The second is Carmine (Danny Aiello), who cheats on his lover, Patricia. Thirdly, there is Evan M. Wright (Robert De Niro), who not only insists his mistress Beverly gets the starring role, but also that the script be approved by him. THE DARKNESS AND THE LIGHT is an obsession which has consumed five years of Marvin’s life and his marriage.

Although funny at times, MISTRESS abounds in bad character and foul language, most of it coming from Robert De Niro and Sheryl Lee Ralph (as actress Beverly Dumont). Also, MISTRESS implies that Marvin’s obsession takes precedence over his marriage, which he abandons. MISTRESS takes after many contemporary comedies which are wrecked by foul language, bad characters, and negative messages.