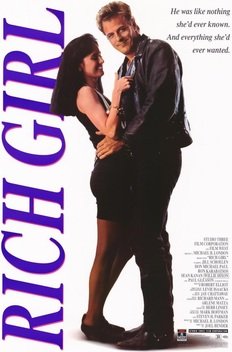 In RICH GIRL, a spoiled girl, Courtney, breaks away from an overbearing dad and an overly ambitious fiance only to fall for (and sing back-up with) the lead vocalist in a struggling Hollywood band, Rick. This hollow film conveys much that is wrong to young people. Rick and Courtney not only make love before marriage, but she openly defies her father, telling Rick, "I hate him."

RICH GIRL turns out to be another of those sparsely plotted, poorly acted movies that attempts to show a young girl making it on her own. Instead, the film shows a rebellious, loose-living girl, devoid of conviction and moral values.

In the film, spoiled 21-year-old Courtney Wells runs away from her wealthy father and her fiance and goes to Hollywood where she lands a singing job in a Hollywood club and falls in love with lead singer, Rick.

At first, Courtney’s job-hunting attempts get her nowhere, especially when she refuses to take a typing test, and in desperation, she takes a waitressing job at trendy Rocco’s. However, when lead singer Rick notices her, the two wind up in bed together; getting to know each other can wait.

At any rate, Rick discovers Courtney can sing, and secretly, she practices with the band for the Big Competition night. Things get complicated when Wells’ boyfriend, Jeff, and an acquaintance show up at the club. They get nowhere, however, in their attempts to get her to leave.

Finally, Courtney’s wealthy father comes to the club. When persuasion fails, the elder Wells has drugs planted on Rick’s cycle. Of course, Rick already has a police record, the cops pick him up, and he lands back in jail with $10,000 bond.

A short time earlier, Rick’s dad, a skid-row bum, had died, and Courtney had gone to the mission for the funeral. However, Rick now knows that Courtney is very rich and thinks she deceived him, so he wants nothing to do with her. Naturally, the situation works out in the end when Courtney hocks her mother’s diamond bracelet to get Rick out of jail. They make up, and the band is a success on Competition Night.

One has to ask, in light of movies like RICH GIRL, why this waste? Of money, time and possibly, talent. Unfortunately, this hollow film that conveys so much that is wrong to young people, is far too representative of current film fare. Rick and Courtney not only make love before marriage, but she openly defies her father, telling Rick, “I hate him.” As the prophet Samuel warns Saul in I Samuel 15:23: “For rebellion is as the sin of witchcraft, and stubbornness as iniquity and idolatry.” We can do without movies like RICH GIRL.