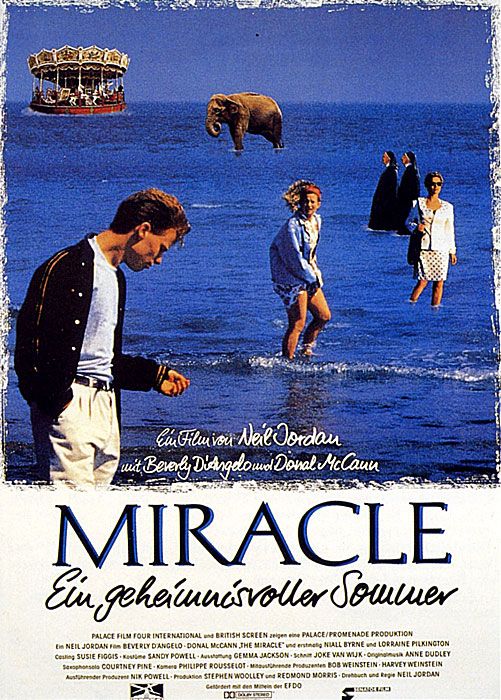 In THE MIRACLE, set in an Irish seaside town, teenager Jimmy's mom, supposedly long dead, returns to the town to appear in a play, and Jimmy, unwittingly, falls for her. Aside from some charming cinematography, THE MIRACLE contains mediocre acting, a hazy plot and the repugnant theme of incest.

Insipid and pointless, THE MIRACLE promises more than it delivers. The film, set in an Irish seaside town, involves a psychological drama played out between mother and son, along with a veiled theme of incest.

During summer break, teenagers Jimmy and Rose wander around the beach area conjuring up wild scenarios about the people they see. For example, they fabricate an intimate relationship between an old man and old woman who pass each other daily but never speak. They also observe a quiet, reserved young man in a local restaurant, and Jimmy, with what he considers profound insight, remarks dreamily: “The drabness of his life was so complete, it has its own fascination.” Rose takes it from there in her inimitable style. She tends toward flippancy and sarcasm.

However, a mysterious, attractive American woman appears on the beach one day and piques the teenagers’ interest. Jimmy wants to know all about this attractive stranger, so he follows her and soon discovers that she is an actress performing in nearby Dublin.

Rose, on the other hand, pursues her own interests: namely, seducing a young circus animal trainer. As she tells Jimmy, knowingly, the act should be done “with her hair spread out like a fan.”

The movie goes down hill from this point as Jimmy runs after the actress who performs at a night spot in nearby Dublin. Later, Jimmy accompanies her to a party where she sings “Stardust,” one of several renditions of the song in the film, and Jimmy plays along on the piano. Seems his single dad, a jazz saxophonist, taught him the ditty as they performed in a local night spot.

Telling Jimmy his mother is dead, Jimmy’s father becomes incensed as Jimmy avidly pursues the actress night after night. Shortly, Jimmy’s dad appears at the nightclub and angrily tells the actress to leave him alone. However, as the story develops, the viewer learns that Jimmy’s dad and the woman had known each other in the past. In fact, their relationship had been more than casual and the viewer begins to put the puzzle together.

Near film’s end, when Jimmy discovers the truth about the actress, he seeks solace in a church. The supposed “miracle” occurs after he asks a statue of Christ for a sign, falls asleep and awakens to see a circus elephant standing in the church. When he shares the miracle with Rose, she gives him a progress report on the animal trainer. Suffice to say, her hair was “spread out like a fan.”

THE MIRACLE, with its enigmatic scenes involving caged animals, nuns, Jimmy’s dad’s weird dreams, and the thinly disguised incestuous relationship between Jimmy and the actress, proves quite disturbing. Even before the viewer gains full knowledge about the actress, he wonders why she indulges Jimmy. Obviously, she enjoys the attention from this ardent fifteen-year old, but the viewer becomes more and more uneasy as Jimmy boyishly attempts to make love to her. Nor does she deter his advances.

So, the topic of incest turns out to be one of the more recent of Hollywood’s sordid film subjects. Has the media elite exhausted most of the others, including graphic, nude shots of couples fornicating on their first date? Of course, THE MIRACLE has that one, too, as we are treated to Rose and her animal trainer friend fornicating under the big top.

Never mind that the subject of incest is not new. God warned the children of Israel against such sins repeatedly in Leviticus, the twentieth chapter, and again in the New Testament. For example, St. Paul’s admonition in I Corinthians 5:1: “It is actually reported that there is sexual immorality among you, and such sexual immorality as is not even named among the Gentiles that a man has his father’s wife!”

The Greek tragedy, OEDIPUS REX also deals with an incestuous theme. Contrary to Hollywood’s treatment of a taboo subject, Oedipus blinds himself upon the realization that his wife is his mother, even though the marriage was a prophetic fulfillment of the Delphic oracle.

Representing a pagan culture, the Greeks proved they were way ahead of our so-called civilized society in their repudiation of incest. As Christians, we can at least express our abhorrence of such film subjects by our lack of box-office support. Like Oedipus, we, too, should “blind” ourselves to such despicable film fare. Given the mediocre acting and hazy, disgusting plot, even the charming cinematography can’t save this one.