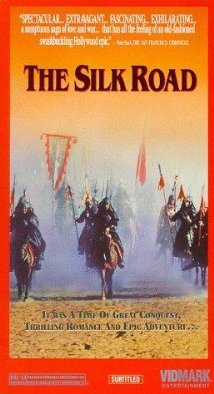 In THE SILK ROAD, a young eleventh-century Chinese scholar finds himself plunged into romance and high adventure during an imperial civil war, and, during the battle for a strategic city, must find a way to save its collection of rare scrolls from the fire of the advancing enemy. Too slow for most Americans, this Japanese production nevertheless has enough going for it to please die-hard fans of the historical film genre.

In THE SILK ROAD, it is 1026 and the Chinese Song dynasty is in civil war with Xixia whose prince won’t pay tribute. Zhao, a young scribe, hears of Dun-Huang, a city in the battle zone famous for its library. On the way there, he is conscripted into the Xixian army. Zhao forges a friendship with Commander Zhu, who makes Zhao his aide-de-camp. After years of fighting, Zhu lands him work for the Prince in Dun-Huang. Zhao has fallen in love with a captured princess. When he returns, he finds the princess engaged to the Prince. On the wedding day, the princess throws herself from the wall rather than marry another man. Zhu decides to oppose the Prince’s plans to raze Dun-Huang, and Zhao hides the manuscripts. Zhu and Zhao sally forth to hold the city, or die trying.

Based on actual events, THE SILK ROAD accounts for the recent discovery of 40,000 ancient writings hidden near the ruins of Dun-Huang. A Japanese production, the film has a plodding first hour and weak character development, but an epic visual design and talented actors still make this a memorable film. Aside from battle violence, the film is free of other offensive elements, including Eastern mysticism.