MOWGLI: LEGEND OF THE JUNGLE 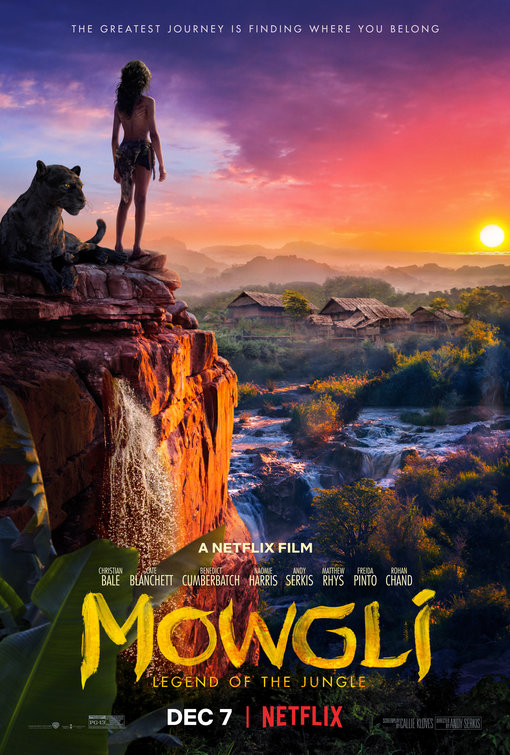 MOWGLI: LEGEND OF THE JUNGLE is a darker take on Rudyard Kipling’s classic Jungle Book story. After being raised by wolves for most of his life, then excommunicated to a man-village where he learns to hunt, the young man-cub Mowgli is torn between two worlds. However, when the evil tiger Shere Kahn starts taking over the jungle, Mowgli must choose between his human village and his jungle home, and rid the jungle of Shere Kahn once and for all.

This version of THE JUNGLE BOOK is more violent and melodramatic than its predecessors, which doesn’t help the story. It still feels too familiar to merit another remake. Yet, the additional violence makes MOWGLI unsuitable for younger audiences who might experience the story for the first time. In the end, the story isn’t enough to hold the attention of adults but isn’t suitable for younger children. While there are light themes of acceptance, there’s little content that’s exceptionally positive or profound to make the movie worth watching. Finally, MOWGLI waters down many of the moral themes of previous versions, making it an unnecessary remake.

(PaPa, EE, FR, B, L, VV, N, AA, D, M):
Dominant Worldview and Other Worldview Content/Elements:
Mixed pagan worldview includes pagan beliefs and some mysticism involving souls departing bodies after they die, with strong environmentalist themes about humans destroying the sacred jungle, taking animals captive, and hunting them for sport, with some references to Hindu beliefs that cows are sacred and light moral elements about community, belonging, and acceptance.
Foul Language:
One light profane instance of “God knows I’m not”;
Violence:
Strong violence includes a baby is found with blood on it, a group of wolves push around and bully another wolf, wolf pack stumbles on a decaying and bloody cow carcass, a tiger gets blood in the water when it drinks from a lake, tiger villain makes several references to “tasting blood” or wanting to taste blood, several action sequences involving wolves trying to outrun a panther as a rite of passage that involves aggressive running and pushing and shoving and biting, monkey people kidnap Mowgli, drag him through the jungle and knock him unconscious with a large rock, a tiger scratches boy hero and gives him large and bloody gashes on his arm for the remainder of the movie, a bear and a panther get into a fight with the monkey people and leave leaving scratched and bloody fur, boy makes threats to tiger villain about setting him ablaze and watching him burn alive, children throw rocks at boy, hunter teaches Mowgli how to throw knives, an intense fight with a tiger involves clawing and growling and stabbing, hunter shoots at a tiger and hits a human instead, human becomes the victim of an elephant stampede, and various wolves die of their injuries from fighting other animals;
Sex:
No sex;
Nudity:
Upper male nudity when boys wear pants with no shirts and boy takes a bath;
Alcohol Use:
Man drinks by the fire and remains drunk for multiple scenes following;
Smoking and/or Drug Use and Abuse:
Man smokes a pipe; and,
Miscellaneous Immorality:
Scary elements and images such as a giant slithering snake, plus monkey people kidnap boy.

MOWGLI: LEGEND OF THE JUNGLE is a darker take on Rudyard Kipling’s classic Jungle Book story, focusing on Mowgli’s journey of being raised by wolves, hunted by Shere Khan, and deciding between his jungle upbringing and a new human village. This more dramatic take on the classic story feels far too familiar to merit another remake. It still feels like a story for children, yet the additional violence makes it unsuitable for younger audiences.

This retelling of a classic follows a human boy found by a pack of wolves as an infant. Hunted by the ferocious tiger Shere Kahn, the wolves adopt Mowgli as a member of their pack and vow to keep him safe. He grows up as one of the pack, but his differences come to a head when he must participate in “The Running,” a rite of passage for all the teenage wolves. They all must race each other through the jungle while evading Bageera, the panther who found Mowgli as a boy who’s also a member of the pack. Knowing a boy has no hope of winning a race with wolves, the bear Baloo trains him to the best of his ability.

While training for the running, Shere Kahn once again renews his vow to kill Mowgli, just like he killed Mowgli’s parents. He waits for the day that Mowgli will be kicked out of the pack so Shere Kahn can kill him. Mowgli must pass the running in order to stay safe. Unhappily, the running doesn’t go as planned, and Mowgli must flee to a human village.

However, when Shere Kahn starts taking over the entire jungle, Mowgli’s loyalties are tested. He must choose between his human village and his jungle home, and rid the jungle of Shere Kahn once and for all.

Directed by motion capture legend Andy Serkis, MOWGLI the movie certainly does have some remarkable animation work and visual effects. Newcomer Rohan Chand, who plays Mowgli, gives a memorable performance, especially when you consider he’s the only live action character for the movie’s first part. It’s interesting to see a darker take on such a childhood classic, with more intense action sequences and higher stakes, but, sadly, this novelty wears off and doesn’t sustain the duration of the movie.

If audience members are familiar with previous retellings, there isn’t much new here except the style. The story itself still feels very much like a story for children, with predictable themes and a predictable ending. It drags at times, with various set pieces that feel like filler scenes rather than a whole movie. The story and the genre still play better to children than they do adults. With Mowgli being on the outside of the pack and not knowing where he belongs, there are numerous messages against bullying and being unique. “They mistake uniqueness as weakness,” one of the runts of the pack tells Mowgli. There isn’t a lot of subtext here, which again plays better to younger audiences.

At the same time, the movie isn’t made for younger children. There are numerous sequences of action violence that leave Mowgli with some pretty significant injuries. Shere Kahn is terrifying and often speaks of wanting to taste Mowgli’s blood. Most adults could be able to handle the amount of violence and blood, but the movie certainly earns its PG-13 rating. This version is also much darker and more scary. In an attempt to make the animals more realistic, they are also rather unpleasant. This version also features an enormous jungle snake, Kaa, who prophecies that Mowgli will be a special leader of both the jungle and men. There’s also a scene where a hunter shows off all of his killings that would be particularly disturbing to a child.

In the end, the story isn’t enough to hold the attention of adults, yet the content isn’t suitable for younger children. This dramatic update is often too dramatic at times, bordering on melodrama, especially at the end. There are also some questionable worldview elements. When Bageera teaches Mowgli to hunt, he says to always look the kill in the eye as they die, so the soul isn’t alone when it departs. Set in the jungles of India, the animals are sympathetic to the Hindu beliefs that cows are sacred. While there are light themes of acceptance, it’s nothing exceptionally positive or profound that makes the movie worth watching. The movie waters down many of the moral themes of previous versions, making it an unnecessary remake.