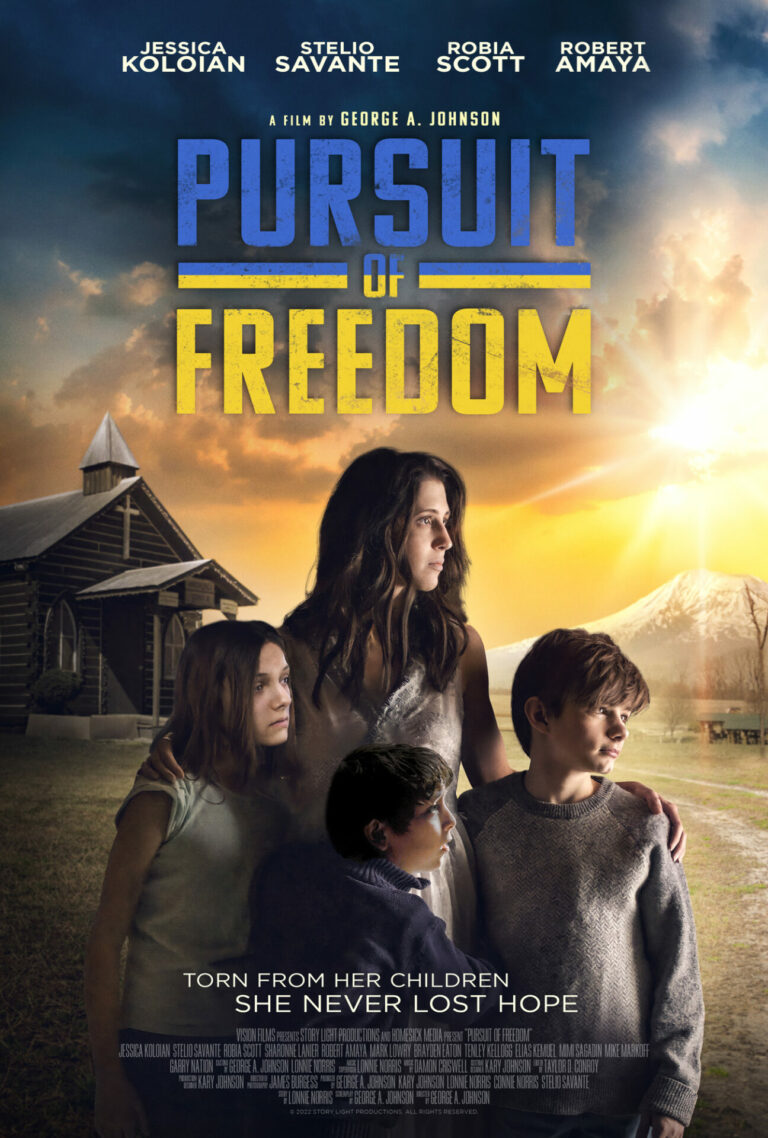 PURSUIT OF FREEDOM is an intense, powerful drama about a woman from Ukraine who gets separated from her three children. Anna’s husband owes some money to gangsters. He gambles to get the money but eventually loses. The gangsters try to kidnap the family. The children get away, but Anna is sold to some Russian sex traffickers in Amsterdam. Three years later, Anna becomes sick and is dumped on the street. A Christian nurse tries to help her at the hospital, where Anna learns her children are hiding somewhere in Armenia with her husband’s poor cousin.

Despite a limited budget and some uneven scenes, PURSUIT OF FREEDOM tells a harrowing, intense story. It also tells a story full of miracles, with many inspiring, uplifting, scenes of escape, rescue, faith, redemption, and compassion. The story is also laced with some humor and, at the end, tearful reunion and much joy. There are many positive references to Jesus, faith, church, and prayer in PURSUIT OF FREEDOM. Also, Anna and her children come to Christ. PURSUIT OF FREEDOM is a heartfelt movie filled with faith and love.

(CCC, BBB, VV, S, A, M):
Dominant Worldview and Other Worldview Content/Elements:
Very strong Christian, moral worldview with many inspiring, uplifting scenes of escape, rescue, Christian faith, redemption, and compassion, plus some biblical references, four characters come to Christ, and many positive references to Jesus, faith, church, and prayer
Foul Language:
No foul language
Violence:
Some light and strong violence includes men chase man through alleys, man jumps one of his chasers but two of them gang up on him and hit him, husband hits wife and grabs her neck and threatens her to mind her own business, husband later appears with two or so bloody wounds on his face in one scene, police chase a man down, traffickers grab a teenage girl to take her into another room, delirious sick woman struggles against her nurses, and sick woman collapses
Sex:
Mother is sold to Russian sex traffickers in Amsterdam, where she’s held captive in a rundown, dungeon-like brothel until she gets sick and is dumped on the streets
Nudity:
No nudity
Alcohol Use:
Man drinks a shot or two of whiskey during an underground card game
Smoking and/or Drug Use and Abuse:
Brief smoking but no drugs; and,
Miscellaneous Immorality:
Kidnapping, gambling, and man steals a piece of jewelry from his mother-in-law’s bureau.

PURSUIT OF FREEDOM is an intense, powerful drama about a woman in Ukraine who gets separated from her three children by Russian gangsters and sold to sex traffickers in Amsterdam but survives against all odds to get a chance to be reunited with her children three years later. PURSUIT OF FREEDOM contains some harrowing scenes, but it also has many inspiring, uplifting scenes of escape, rescue, Christian faith, redemption, and compassion, laced with some humor and, at the end, tearful reunion and much joy.

The movie opens in Ukraine where Anna, a mother with three children, two boys and a girl, struggles to live because of her criminal husband. They live in the home of Anna’s parents. Anna’s husband, Razmig, owes some money to some gangsters. They threaten his family if he doesn’t pay up right away.

Razmig returns home with a birthday cake for their youngest son, Hovan, even though his birthday is a couple days away. Anna gives Hovan his present anyway, a T-shirt with hearts saying, “My Momma Is Thinking of Me.” Meanwhile, Anna finds Razmig upstairs taking some of her mother’s jewelry. Anna tries to stop Razmig, but he grabs her neck and threatens her.

Razmig uses the jewelry to play cards to get the money for the gangsters. He’s lucky at the cards and even wins playing double for nothing. Then, the main rival player orders him to play triple.

Cut to the gangsters invading the home. Anna’s children escape out the upstairs window to a neighbor’s house, but Anna is taken away after they kill Anna’s father. The grandmother then gets a call from Razmig warning her that the gangsters are coming. “You’re too late,” she tells. They just took Anna. Razmig tells the grandmother to take the children to his cousin in Armenia.

However, the cousin barely has enough food to feed herself, much less Anna’s three children. She tries to make do, though she must keep the children hidden from the authorities, who will arrest anyone harboring undocumented children. Meanwhile, Anna wakes up in the red light district in Amsterdam, in a run-down brothel managed by evil Russian gangsters.

Three years later, Anna has become so sick that she’s no longer of any use to the gangsters. So, they dump her in the streets. She wakes up in a hospital, where a Christian nurse named Naomi tries to nurse her back to health. Anna has suffered immense trauma, however.

Eventually, Anna becomes lucid enough to tell Naomi about her three children. By this time, though, Anna finds out her mother has died. She also finds out, however, that her mother may have taken them to Armenia to stay with her husband’s relatives.

Naomi calls a European ministry and asks them for help in tracking down Anna’s children. The man says they don’t do things like that, but says he’ll make some calls.

Eventually, the word gets out at a Christian conference in Armenia, but Armenia is a fairly big country. Will they ever find Anna’s children? The Christian God is a God of miracles, however.

Despite a limited budget and some uneven scenes, PURSUIT OF FREEDOM tells a harrowing, intense story. It also tells a story full of miracles, with many inspiring, uplifting, scenes of escape, rescue, faith, redemption, and compassion. The story is also laced with some humor and, at the end, tearful reunion and much joy.

There are many positive references to Jesus, faith, church, and prayer in PURSUIT OF FREEDOM. Also, Anna and her children come to Christ while they’re being helped by many wonderful Christians and churches. The helpers include a little Christian boy who sees the children hiding in the cousin’s rundown trailer and barn and wonders why they can’t come out to play.

PURSUIT OF FREEDOM is the first of several Christian movies coming out in late summer and early fall. It’s a heartfelt movie filled with faith and love and deserves support.