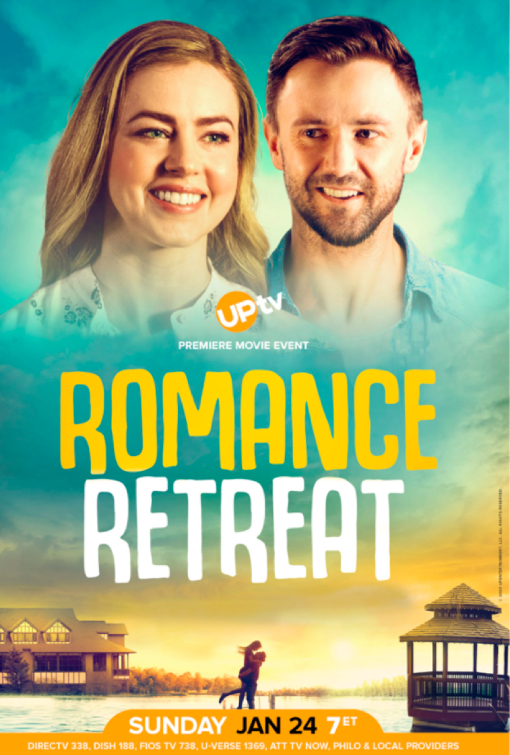 ROMANCE RETREAT is a romantic comedy on UPtv. Ambitious journalist Dana Willingham’s boyfriend breaks up with her while at a yoga retreat. At the same time, Dana’s assigned the biggest story of her career. Dana learns that Stefan, the handsome loner at the retreat, is connected to her breaking story. As Dana grows more comfortable with yoga and the students at the retreat, she learns Stefan’s hiding something. Dana begins to gain his trust, but things get complicated when she starts to fall in love with him. Dana must decide what’s more important, her journalism career or her growing love for Stefan.

ROMANCE RETREAT could have been fun, but it’s marred by a persistent pagan worldview with false, yoga-related philosophy. The movie has some positive elements stressing honesty, journalistic integrity and forgiveness, but they’re ultimately overshadowed by the false religious elements. At points, it’s hard to tell whether the movie’s making fun of yoga or glorifying it. However, by the movie’s end, Dana adopts many of the practices taught at the yoga retreat. MOVIEGUIDE® must label ROMANCE RETREAT as unacceptable.

(PaPaPa, FRFRFR, B, C):
Dominant Worldview and Other Worldview Content/Elements:
Strong pagan, false worldview, Hindu-related yoga practices, pantheistic elements including meditation to the universe, which overcomes positive moral, redemptive elements about the importance of honesty, integrity and forgiveness
Foul Language:
No foul language
Violence:
No violence
Sex:
No sex (unmarried couple shares a kiss)
Nudity:
No nudity Alcohol: No alcohol
Smoking and/or Drug Use and Abuse:
No smoking or drugs; and,
Miscellaneous Immorality:
Nothing else objectionable.

ROMANCE RETREAT is a romantic comedy on UPtv about a female journalist who pursues the biggest story of her career until she starts to fall in love with her primary source. ROMANCE RETREAT could have been a breezy, uplifting comedy about honesty, integrity and forgiveness, but it’s ruined by a strong pagan worldview promoting false yoga philosophy and theology.

The movie opens as Dana and her boyfriend, Jon, do yoga. However, Dana disrupts the class as she works on her phone and laptop. She ends up having to go to work at Seattle True Press. Dana is told that they may have a story about a tech company that’s stealing people’s private information.

Dana rushes out of yoga and hops into a car with another traveler. However, the car’s blocked, so she decides to walk. The story is breaking, but Dana promised to go on a yoga retreat with Jon. She says she’ll write the story while on the retreat and works through the night researching the tech company and its mysterious owner, Esteban Gonzales.

Dana sleeps in the next morning, and Jon isn’t happy. However, the couple makes it to the bus. While waiting in line, she notices that a loner joins the yoga group along with all the couples. Dana recognizes him as the man in the car.

While hiking up to the lodge, Dana drops her laptop and phone in the water. Jon is furious she brought her work with her and breaks up with her in front of the yoga group. To make matters worse, when they finally get to the lodge and save her devices in rice, there’s no Wi-Fi connection.

Due to her breakup with Jon, Dana’s paired up with the loner, who she learns is named Stefan. While she thinks yoga is hokey, Stefan encourages her to give it a shot. Dana quickly realizes that Stefan, while kind and understanding, is hiding something. She pledges to get to know him more and discover whatever secrets he’s keeping from her. As the two get to know each other, Dana discovers that Stefan is somehow connected to her breaking story. She must decide what’s most important, her career as a journalist or her growing love for Stefan.

ROMANCE RETREAT is a romantic comedy from UPtv. While the movie could’ve been fun, it’s marred by a persistent pagan worldview with yoga related philosophy throughout. The movie has some positive elements of honesty, journalistic integrity and forgiveness, but they’re ultimately overshadowed by the movie’s false religious elements. At points, it’s hard to tell if the movie’s making fun of yoga or glorifying it. There are also many jokes geared towards how vegan food tastes horrible. However, by movie’s end, Dana adopts many of the practices taught at the yoga retreat. So, MOVIEGUIDE® must label ROMANCE RETREAT as an unacceptable movie even though it has no obscene content.