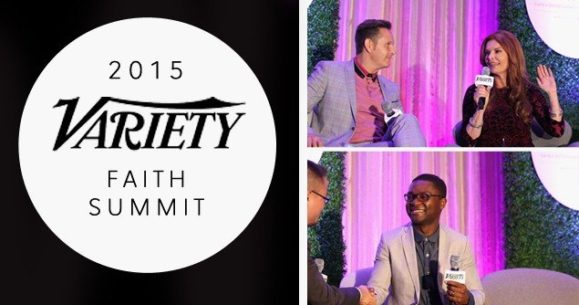 Entertainment industry professionals gathered June 25th for the Variety Family Entertainment and Faith Based Summit in Los Angeles. At the 4th annual sold out entertainment summit, content creators and studio distributors gathered to speak, discuss and strategize on how to reach the faith based audience in an authentic way. “Faith has been a part of [movies and television] for a long time, from the beginning.” Peter Goldwyn, SVP of Samuel Goldwyn Films said. “It’s only been in recent years that studios have started catering to that audience.” One of the outcomes of successes like HEAVEN IS FOR REAL and GOD’S NOT DEAD is an increase of content. “It’s up, but it’s crowded,” Goldwyn said, emphasizing that competition among the faith based entertainment will force the content to improve in quality more rapidly.

The word of the day at this year’s summit was “authenticity,” with many speakers lamenting that the difference between success and failure lies in the authenticity of faith and passion coming from the artists and networks. Breakout actor David Oyelowo, who portrayed the Rev. Martin Luther King Jr. in last year’s SELMA, spoke on how his faith deeply impacts the roles he accepts. “When these films work is when there’s a conviction in the filmmaking. The Bible talks about anointing, when something is anointed, it has been blessed from above. I felt God had called me to play that role [SELMA]. God is real people. When you watch THE PASSION OF THE CHRIST, you know it was made by someone who believes in its subject.”  Oyelowo continued, “I have a very real, potent, visceral relationship with God. It began when I was 16 and became a born again Christian.”

Producing couple Mark Burnett and Roma Downey (SON OF GOD, A.D.: THE BIBLE CONTINUES) spoke passionately about their personal faith and how that’s infused in the upcoming slate of projects. Including a remake of the biblical epic BEN-HUR due February 2016 and a new TLC series titled ANSWERED PRAYERS hosted by Roma Downey about real stories, real miracles, all through answered prayers. Roma Downey summed the show’s purpose simply, stating, “There is a God. He loves us and there’s power in prayer.”

Speakers also addressed negative reactions from Christian audiences, including last year’s NOAH, which created a lot of controversy regarding its loose interpretation of biblical events. Rob Moore, Vice Chairman of Paramount Pictures, which distributed NOAH, candidly stated that you have to accept that you can’t please everyone in the Christian audience. Oyelowo similarly exuded,  “As a Christian actor, a lot of the pushback you get is from the church.” He continued, “Ultimately, we’re hear because Jesus chose to do what His father told him to do and not what the religious people wanted.” Brian Bird, writer and executive producer of Hallmark’s WHEN CALLS THE HEART and the upcoming movie faith based movie starring David Oyelowo, CAPTIVE, agreed, saying,  “You have to walk a fine line,” Things almost always came back to authenticity, and the importance of proving to the audience that the filmmakers deeply care about the material, especially when pertaining to The Bible. Rob Moore of Paramount stressed that Jesus’ portrayal in BEN HUR will be consistent with the Christian audiences expectations, and after showing a brief clip, Mark Burnett and Roma Downey also championed the movie that they oversaw and described as a grand epic.

One thing that is no longer a secret is that the Christian audience is a majorly underserved audience. Among the speakers was MOVIEGUIDE® founder Ted Baehr who shared a report of the strides that have been made in Hollywood and gave an overview of the MOVIEGUIDE(r) Report to the Entertainment Industry that has transformed the Entertainment Industry over the last 30 years.

Rob Moore ended his talk by sharing, “There’s a reason superhero movies are so popular right now. There’s some power out there bigger than me. There is a God that actually cares about you, and you can put your faith in that. That you can reach some sort of redemption in your heart.” Brian Bird stated, “It’s radical programming. Everybody else is following HBO over the cliff into the dark and depraved.” Oyelowo, while emphasizing his desire to reflect realistic Christianity that doesn’t pander, he added that he’s not in a rush to play characters that murder four people in the first 15 minutes, “But there’s something about that story (CAPTIVE). Most Christians, have someone in their life who’s struggling with addiction.” He continued, “If you’re gonna make a faith based movie, know your subject. Do you believe in the fundamentals of family in a moral compass, or the idea of right and wrong, which has been eroded [in the media]?”

Many of the speakers and attendees are seeking to be a light. Executive Producer at Oxygen Holly Carter poignantly retold a story of asking her pastor whether she can cross over into Hollywood and be a believer, to which her pastor responded, “You can cross over, as long as you take the cross over.”

No longer is faith, specifically the Christian faith a secret in Hollywood, and it’s here to stay.