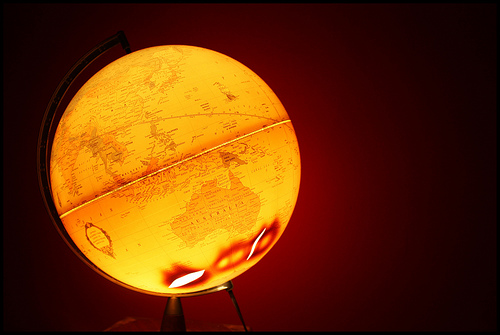 A study on the American Associate for the Advancement of Science’s website projected an increase in temperature of 2.4 degrees Celsius and worldwide food shortages in this decade. The study has since been pulled from the site after experts discovered multiple errors and deemed the findings flawed.

Weymann also said study author Hisas was told of the problems in advance of the report’s release.

“The author of the study was told by several of us about this error but she said it was too late to change it,” he noted.

Scientist Scott Mandia emailed Hisas before publication to explain why her figures didn’t compute and why it would take “quite a few decades” to reach a warming level of 2.4 degrees Celsius.

“Even if we assume the higher end of the current warming rate, we should only be 0.2C warmer by 2020 than today,” Mandia wrote.

In an email to AFP, AAAS spokeswoman Ginger Pinholster wrote, “A reporter with The Guardian alerted us yesterday to concerns about the news release submitted by Hoffman & Hoffman public relation.

“We immediately contacted a climate change expert who confirmed that the information raised many questions in his mind, too. We swiftly removed the news release from our website and contacted the submitting organization.”

The Intergovernmental Panel on Climate Change, whose figures were cited as the study’s basis for its projections, and Al Gore won the Nobel Prize for Peace in 2007 “for their efforts to build up and disseminate greater knowledge about man-made climate change,” the prize committee said at the time.

Osvaldo Canziani, who was part of the 2007 Nobel Prize winning panel, was also the scientist listed as scientific advisor to the faulty report. On Tuesday, Canziani’s spokesman said he was ill and unavailable for interviews.

This is not the first “climate change” or “global warming” study to be debunked. Many others have also been debunked, as has Al Gore’s documentary AN INCONVENTIENT TRUTH.

Obviously, ideology, not science, is fueling much of this “research.”