Behind the Scenes of PUSS IN BOOTS: Walking in Director Chris Miller’s Boots 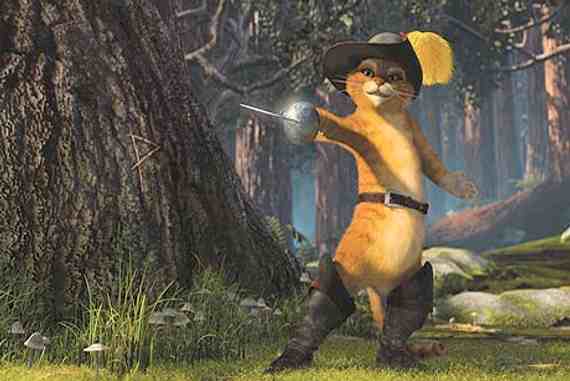 MOVIEGUIDE® recently spoke with the director of PUSS IN BOOTS, Chris Miller, who has also worked on the popular SHREK movies. Puss is an adventurous cat who strives to help his home town and bring honor to the orphanage keeper who takes him in as her own.

Although there’s some innuendo in PUSS IN BOOTS that requires caution for young children, it’s a delightful animate comedy that extols some other moral values.

MG:  What morals can families get from Puss in Boots?

Chris Miller:  I think the main moral message of the film is that everyone deserves a second chance in life, and it is never to late to do the right thing, to turn your life around. . . . His story has a lot of drive behind it. He saw the light at an early age and knew he was on the right path. He spends the whole movie trying to clear his name. He’s the guy who always effects change around him. I like that that is what the main character does in this film.

MG:  Puss always seems to want to do the right thing.

Miller:  Yeah. . . he has an extraordinary capacity for forgiveness. He’s got a huge heart. A total troublemaker, but he does have this tremendous heart and sense of loyalty and honor. It’s pretty crazy. . . he completely changes Kitty’s perspective on her world and ultimately Humpty’s who’s done some really fairly horrendous things towards the end of the film

MG:  Puss tries to persuade Humpty to do the right thing, correct?

Miller:  Yeah, he is so determined to redeem that relationship, to give it a chance.

MG:  What inspired you to make this movie?

Miller:  I loved the character. We always wanted to work with the cat. He has all these adventures; he’s been everywhere, done everything. So much fun, seemed limitless what you could do with him. A really appealing character. When DreamWorks finally really wanted to make the movie, I was really into it. Everything you needed to make the film was already in that character.

MG:  He’s based on a French Character right?

Miller:  Yeah, early on there was a real attempt to make it as told the original fairy tale and which I never understood, and they tried and it was horrible. It just didn’t work. It was the French version. It wasn’t Antonio Bandaras. You’re so far past the original [French] idea was when you cast him.

MG:  When first making the Shrek films, did you ever think they would become franchises?

Miller:  No, we were kinda the ugly step child of the studio, the green ugly character. But, the studio always supported it. They could feel like it was something special”

MG:  Why have you decided to do so many family films?

MG:  Is there anything more for Puss in Boots?

Miller:  I hope so. I really have had a great time doing it. The cast is brilliant. The chemistry with the crew is genuinely. It’s hard, it’s a long haul. It’s like a three-year haul. But, we genuinely enjoyed the whole thing. We had a really good time with each other. I’m a big believer that that somehow translates onto the screen, ’cause I’ve been on crews that have been angry and bitter and jaded, and they may be making the funniest film in the world but you can feel it, you can actually feel it when you watch a movie. Something that was [supposed to be] playful and funny feels really cynical.