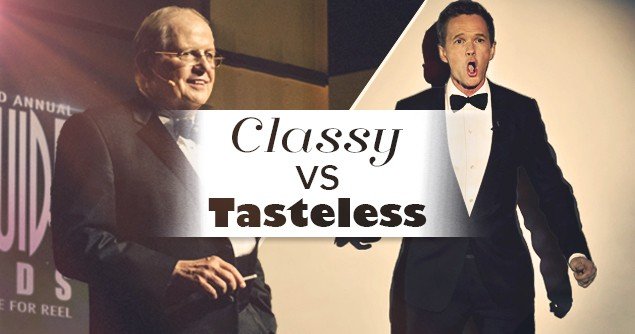 According to Box Office Mojo on February 23, the movies that for the most part the Academy Awards honored were movies that have not done well at the box office and those that have done well at the office did not receive top honors at the Academy Awards. These results reflect the votes of the elite and select few of the Academy and not the votes of the general public. However, the public with its box office tickets and votes will influence what is produced in the future. There is power in numbers and in money spent.

However, at the Movieguide® Awards Gala the will of the public for more redemptive, family, and American values movies was reflected. Not only that but the red carpet and ceremony for the Movieguide® awards gala was classy and entertaining without tasteless humor, sketches, and costumes or evening wear. What stands out in memories of the events that included interviews on the red carpet and seeing the honorees at the awards gala is the pervasive positive character qualities that were manifested there. Most on the red carpet and involved with the Movieguide® awards gala events were not self-absorbed but focused on the big picture of what is divinely happening in Hollywood, They were enthusiastic and grateful for the growing interest and commitment by the major Hollywood studios and artists to producing more and more redemptive, excellent movies, television, and media to redeem, uplift, and inspire viewers in our hurting, dark world. It was wonderful to see how all of the major studios, as well as independent ones, were honored for their good work and as their executives took the stage to receive awards how they conveyed their desire and ongoing commitment to producing good family and redemptive movies and television.

Many executives, producers and artists in interviews on the red carpet, in words on stage, and in conversations at other activities of the four days of Movieguide® Awards Gala events shared their enthusiastic appreciation for being able to support and produce redemptive, inspirational, uplifting projects and for the support and facilitation of Movieguide® of work in redemptive, family movies and television. Some of these gracious, grateful, and humble individuals included: Diogo Mordado (“Son,of God”), Connor Corum and his producers (“Heaven is for Real”), Serena Miller and her producers (“Love Finds You in Sugarcreek “), Russell Wolfe (producer for “God’s Not Dead” who came on stage in a wheelchair with ALS) with his team of producers and actors, Imani Hakim (“The Gabby Douglas Story”), Bill Engvall (Movieguide® gala host, actor, producer, writer…), Pat Boone (legendary singer, actor, Movieguide gala presenter ), Corbin Bernsen (“Christian Mingle”), John Savage (veteran actor), Britt George and Whitney Goin (“Welcome to Inspiration”), Rachel Hendrix (“Coffee Shop”), Shari Rigby (“October Baby”) and more.

Devon Franklin, President and CEO of Franklin Entertainment, was an outstanding presenter on the Movieguide® Awards Gala stage. As an enthusiastic supporter of redemptive movies and television, he stated that if he could not bring faith to the world through his work that he should not be in his position. He shared how some had warned him that he would be committing professional suicide producing redemptive movies. On the contrary, however, now that he is fully committed to producing such uplifting, inspirational, faith-building movies, doors are open wider today for him and his work than in any time in his eighteen years in the business. He stated that he believes with his whole heart that God answers prayer.

There was a pervasive team spirit at the Movieguide® events where many were focused on the importance of everyone there working together to produce better and better, edifying, uplifting, inspirational movies and television as light in our dark world. Those who emanated such a positive, team-focused, humble spirit included executives, producers, and artists of diverse ethnic backgrounds and ages. These film, television, media leaders seemed committed to an epic, universal cause greater than themselves for the eternal good of our world.

It was said at the events that Some People Let Things Happen, Some Make Things Happen, and Some Don’t Know What Is Going On. Those at the Movieguide® events, with their philosophy of Hope Not Fear, were among Those Who Make Things Happen for the universal good of our world. In daily correspondence with Movieguide® associates since the gala, it has been clear that Those Who are Making Things Happen are on the move and that their divinely guided momentum is growing. There are more excellent redemptive, family-friendly, and American values movies and television programs on the horizon in 2015. Stay tuned.

(This article has been written by Diane Howard, Ph.D. for her Austin Movie Examiner column. Her web site is www.dianehoward.com.)