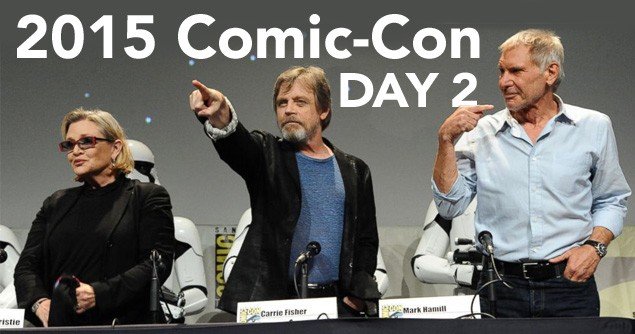 Storytelling and Welcoming Back Old Friends

Movieguide® was in Hall H Friday to get all the news from the largest, most exciting area of this year’s Comic-Con in San Diego. The highlights Friday were the two WALKING DEAD series and the new STAR WARS trilogy.

However, the day was filled with many comments from the panelists saying “we can’t actually reveal anything.” Yet, that’s why 7,000 people camped overnight in front of the building, to hear something that wasn’t expected, some new news, not to be told that nothing could be revealed.

Almost every panel did this, including THE WALKING DEAD, FEAR OF WALKING DEAD, GAME OF THRONES, and even STAR WARS:  EPISODE VII – THE FORCE AWAKENS. Come on, we definitely need some new news on STAR WARS! Including the details of the new characters and exact storyline.

That said, the story was really the thing Director J.J. Abrams wanted to feature, saying he didn’t worry about the stress of the pressure in making the new STAR WARS movie, but rather in creating a good story.

“You gotta ask, what’s the story,” he said. “It’s literally Storytelling 101, what do the characters want, what makes it exciting. . . what does it mean? Why are we doing this?”

In the past, Abrams has brought moviegoers some good stories, so many fans hope he can do the same for STAR WARS. In fact, Harrison Ford said, after he read the script, he really did think it was a great story.

“It felt great,” he said, adding, “I’m proud and grateful to once again be involved. This was the beginning of my working life.” At that moment, Ford teared up in front of 7,000 people.

Ford appeared with his two STAR WARS acting buddies, Mark Hamill and Carrie Fisher, who thrilled the audience with their appearance on the STAR WARS panel.

The real question at the end of the night was, will they side with the light side, or the dark side? At Movieguide®, we strive for the light, because in the end, this is what prevails.

Summing everything up was Sonequa Martin-Green, who plays Sasha Williams on THE WALKING DEAD. When asked about her hopes for her character, she said, “Healing, restoration. You hope there is light at the end of the tunnel and can find a reason to live again.”

A funny moment from THE WALKING DEAD panel below!