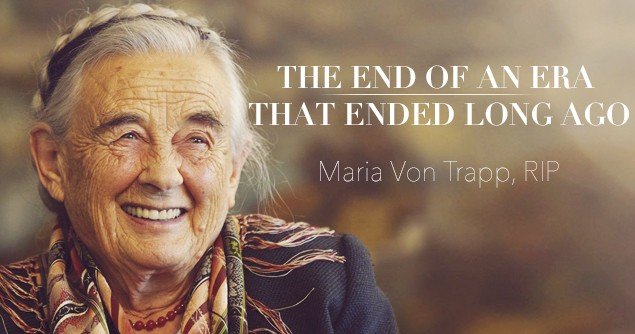 The End of an Era that Ended Long Ago

Editors Note: 113 years ago on January 26, 1905, Maria Augusta von Trapp was born. She was notably portrayed by Julie Andrews in the movie THE SOUND OF MUSIC.

Only a couple of years ago, the last of the Von Trapp children passed away, her name was also Maria, like her step-mother. Maria Von Trapp’s death in February 2014 marked the end of an era.

The Sound of Music deserves its accolades as the Movie of the Year (1965) and one of the finest films ever made. Even my one-year-old granddaughter is mesmerized by the puppet scene.

As a film, it is an icon. One time the great anti-gambling crusader, Rev. Tom Grey was asked on 60 Minutes to respond to those who say gambling is just entertainment. Noting the tragic toll the “entertainment” of gambling often takes on its victims, Grey asked, “Who watches The Sound of Music and then shoots himself in the parking lot?”

What’s fascinating about the real Von Trapp Family is just how Christian the true story is.

The religious elements come out to some degree in the movie. Yet when the movie was marketed for Brazil, instead of the title we know the movie by, they decided to call it (in Portuguese) “The Rebellious Nun.” But, Maria didn’t really rebel per se. She just discovered that God’s call on her life was to serve God as a wife and mother, not in a cloister.

In her 1949 book, The Story of the Trapp Family Singers, Maria Augusta Trapp said of her marriage to the Captain, Georg Von Trapp, “I greeted it with a heart full of happiness and readiness to serve God where He needed me most—wholeheartedly and cheerfully.”

Although her role expanded later, Maria the nun was initially assigned just to tutor Maria, the daughter of Captain Von Trapp.  Ironically, Maria the little girl was “of delicate health.” She is the one who died earlier this year, after living to be 99, outlasting them all.

Maria didn’t mind the assignment to help the children (even though there had been 25 tutors and governesses before her) because she viewed it as temporary: “After all—I don’t belong here; I am just loaned.” But soon, she came to be appreciated by the whole family, including the Captain.

Maria was shocked when she asked Maria Von Trapp, “Don’t you have an Advent wreath every year?” The child replied, “No, we never did. What is it?” So the nun on loan to help the children not only brought music to the von Trapp family, but a Christ-centered Christmas as well.

The Captain later confessed, “I always feared Christmas more than any other day, but this year you have made it very beautiful for us. Thank you.”

Maria whispered a prayer of gratitude to Jesus, “I thank You so much for sending me there. Please help me to draw them all closer to You.”

Her prayer was answered. The Captain said to Maria, “I wish my children would get thoroughly acquainted with Holy Scriptures…. Let’s start them with the New Testament, and let’s read it together every evening until Easter.”

Maria said of their Bible-reading: “It proved to be the Book of Books, the only one in the whole world to which a four-year old girl would listen with enraptured interest while all the philosophers are not yet able to get to the bottom of its divine wisdom.”

Maria and the Captain got married in 1927; and the Von Trapps began performing musically as a family after a priest friend, Father Wasner, discovered what talent they had. They became a smash hit.

Meanwhile, after the Nazis took over their native land in 1938, the children told their parents: “In school we are not permitted to sing any religious songs with the name of Christ or Christmas.”

This was just the tip of the iceberg. So they had a family conference, where Captain Von Trapp said: “Children, we have the choice now.” Either keep “the material goods we still have” or “our faith and our honor. We can’t have both any more….I’d rather see us poor, but honest. If we choose this, then we have to leave. Do you agree?” They agreed and got away in time.

Sadly, they later learned that their mansion they had fled back in Salzburg had been seized by the Nazis, who turned their chapel into a beer parlor. Heinrich Himmler himself lived there and Father Wasner’s room was turned into a guest bedroom for Hitler. Maria writes, “One day when Hitler was visiting there, chauffeurs and orderlies were waiting outside on call. One of these soldiers hummed the melody of a Russian folksong.” Hitler then had them all shot on the spot!

The family came to America to tour as a music group, but initially, it did not go well in this country. Their act was too oriented toward sacred classical music. They were almost reduced to getting menial jobs unrelated to music just to stay in America. Their first manager lost money on them and said, “You will never be a hit in America. Go back to Europe.”

Said Maria: “Back to Europe, with the Swastika stretching its black spider legs all over the map.”

They got another chance from a new manager who said, “…we shall start by changing your name. Trapp Family Choir sounds too churchy. I am the manager of the Trapp Family Singers.”

Eventually, they settled down in Vermont and created the Von Trapp Family Lodge, which still operates today. So we salute the end of an era, which proved the wisdom of the statement made in the movie: “When the Lord closes a door, somewhere He opens a window.” Or as the elder Maria says in her book, “God’s will hath no why.”