Humor in the Midst of Horror in Ninth Episode of ‘A.D.’ 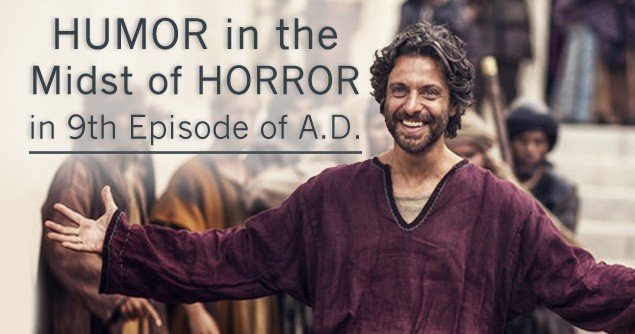 Humor in the Midst of Horror in Ninth Episode of ‘A.D.’

On May 30, a private, preview screening of the next episode of “A.D. The Bible Continues” provided by NBC reveals that this Sunday, May 31, viewers of “A.D. The Bible Continues” will enjoy some comic relief in the midst of the growing horror related to Caligula’s reign. Upcoming Episode Nine depicts the caring, encouraging Barnabas attempting to temper the loose cannon, Paul, who was formerly Saul before Jesus Christ’s appearance to him on the road to Damascus and Saul’s conversion to Christianity with his name change to Paul. The “Mutt and Jeff” duo of Paul who towers over the pug-nosed, Sam Gamgee-type character of Barnabas (played by Kenneth Collard), who scampers after Paul with his impetuous, impulsive behaviors and loud mouth, provides some needed comic relief and some insight into some of the humor in the Acts story, such as when Paul is humbly and comically lowered in a basket from a wall, after inciting a riot against him. Peter and the other apostles, as they refer to Saul who has become Paul, ask over and over “Why him?” John responds by saying that Jesus has always been full of surprises!

In “A.D. The Bible Continues,” the nuanced acting, spectacular sets, impressive costumes and more of this multi-faceted story with its multi-dimensional characters is full of surprising, unexpected twists and turns. Viewers watch the honest internal and external struggles of the apostles in the midst of the real and intensifying horror or the reign of Caligula. Viewers see the overcoming grace, forgiveness, and power of God’s Holy Spirit in the apostles as they deal with the diversity in their own group and the increasing external threats.

The “A.D. The Bible Continues,” series is providing excellent, first-class, American television programing. It is inspiring courage and faith in viewers around the world, as well as leading them to read and study the Book of Acts. Stay tuned for more about upcoming episodes for this outstanding series with its epic, eternal significance.