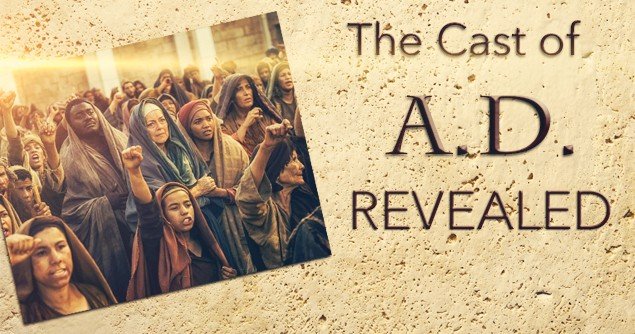 Roma Downey and Mark Burnett could be credited for being two of the pioneers of the so-called “year of the Bible.” The former TOUCHED BY AN ANGEL star and SURVIVOR creator helped THE HISTORY CHANNEL to receive some of its highest ratings when they presented THE BIBLE mini-series during Easter of 2013. Then the married coupled did some heavy editing to create a theatrical release of SON OF GOD, which opened on Easter this year and also did very well.

Today, NBC started getting the ball rolling for promotion of Downey/Burnett’s latest project, simply titled, A.D., a 12-week limited series beginning on, you guessed it, Easter 2015.

“Christianity is among the most diverse movements in history, so when Mark and I looked to bring this epic story of A.D. to life on NBC, it was important to us to find a cast as diverse and beautiful as the church is around the world.” said Executive Producer Downey in a recent press statement. “We look forward to sharing these amazing performances with our audience, and in them we hope that people see themselves.”

Juan Pablo di Pace (MAMMA MIA, NBC’s CAMP), has been cast as Jesus and will be joined by an accomplished cast from more than 10 different nations. However, Jesus won’t be given much screen time with this project. A.D. will focus on the first ten chapters of the book of Acts, which explores what happened after Christ’s death and the beginning of the Christian church.

The current press release describes the series as including “compelling context around the Biblical text, focusing initially on the Book of Acts while integrating dramatic history to help tell the full story of the people and their era. The audience will enter the world of the Apostles, of Pilate, Caiaphas, Herod Antipas and others, all from their own points of view.  Each episode aims to bring the Biblical world to life in all of its grit and glory.”

To help aid churches with their message, the makers of A.D. have created a Bible reading plan that can be distributed to church members free of charge.

The link for the Bible reading plan: shareadtheseries.com

Editors Note: Jeffrey Totey is a movie enthusiast and writes from a Christian perspective who writes a column called Peanuts & Popcorn.