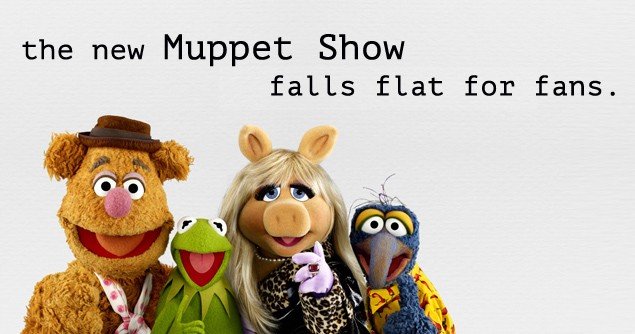 Is it just me or did it seem the new Muppets that premiered on ABC on Tuesday evening, lack a little something? Sure, I had hopes as I turned my channel excited to invite that crazy crew back into our families’ lives (and hearts). Back in 2011, HOW I MET YOUR MOTHER star Jason Segal resurrected the Muppet legacy by producing the first Muppet movie since the 1980s. It premiered to rave reviews and gave birth to a second movie in 2013.  So, when I heard the Muppets were having their own show in the fall, I breathed a sigh of relief. Finally, the networks have wised up to their audience’s desire to bring back clean, quality programming. I was wrong, and so was most of the fans of the Muppets. Sure, executive producer Bill Prady, creator of the BIG BANG THEORY who spent the early days of his career as Jim Henson’s assistant, seemed like the best choice to reignite the Muppet magic and present it to a new generation of children, but what made the MUPPET SHOW of the past different is that it didn’t have to try to be funny. The Muppets delivered well-written, clever jokes that appealed to both adults and children. It was tough enough to see the twenty-five year relationship between Kermit and Miss Piggy end amid several other high profile celebrity marriages, but Kermit  “cross promoting” with new girlfriend Denise? New character Pepe the Crustacean shouting, “Gender is fluid?” The original Muppet Show didn’t have to try to be funny, it already was, and it didn’t have to weave in double entendres to do it. I’m not the only one who thinks this show has fallen flat amongst its fans. In a New York Times article, writer James Poniewozik writes, “The first two episodes of ‘The Muppets,’ which has its debut on Tuesday, are sometimes funny and have flashes of the original’s charm, but they also reflect a definition of “adult” that could stand to grow up.”1 It seems Bill Prady got the formula for Muppet magic a bit mixed up. The original Muppet Show appealed to children with just enough smart humor for adults to enjoy as well. This Muppet Show uses a childhood favorite to draw in adults with inappropriate humor—a recipe many people will quickly turn off. *** Editor’s note by Dr. Ted Baehr. For the fans of the original Muppets, here is a bit of history. Our Good News Communications, Inc. dba Board of Reference member Bob Savage was the COO of the Jim Henson Company that birthed the Muppets. Bob, like Jim, grew up Christian Scientist, but was saved by Jesus Christ and went to St. Paul’s Church in Darian, CT, while Jim went to Black Rock Presbyterian in the suburbs of New York City. Both churches were famous charismatic Christian centers of the Faith. Bob and I became close friends in the 1970s when I was Director of the TV Center of City University of New York. One of my colleagues and C.U.N.Y. professors in the TV dept. was Jim Day, a Baptist, who was one of the founders of Children’s Television Workshop that produced SESAME STREET, which birthed the Muppets. When I became President of ERTVF, the organization that owned and produced THE LION, THE WITCH AND THE WARDROBE for CBS TELEVISION that had 37 million viewers and won the Emmy Award for National Program Special, CTW was our designated producer and hired famous Hollywood animator Bill Melendez, whose lead animator was Phil Roman, a devout Catholic, who later started the Film Roman company that produced THE SIMPSONS.  These friends understood that their art reflected the Creator, in whose image they were created to be creators. God gifted them with Holy Spirit inspired creativity, just as some of the greatest artists of all time, such as Michelangelo and Bach, sought Jesus Christ and the gifts of His Holy Spirit for their creative genius. Perhaps, Bill Prady needs to seek the Truth that will set him free to be as creative and funny as his progenitors. After all, Jesus came and comes to set you free to have a more abundant life (see John 10:10).   Editor’s note: Michelle S. Lazurek is a pastor’s wife, bible teacher, mother, author and speaker. She gives discipleship tips on her weekly blog (www.discipleshiptoolbox.wordpress.com).   She is a member of the Advanced Writers and Speakers Association and leads a community group for Incourage. She has written articles on discipleship for places such as Charisma Magazine, Soli Gloria Deo Sisterhood, and www.womensministry.net. Please visit her website at www.michellelazurek.com.