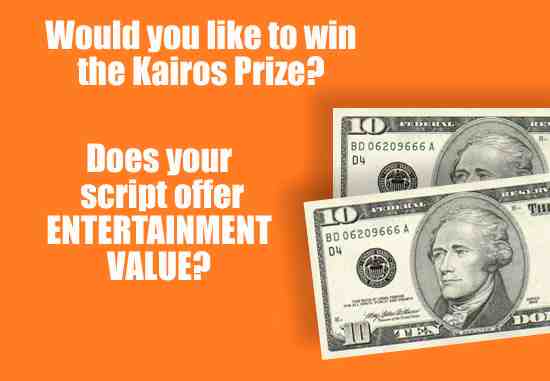 Dr. Ted Baehr, founder of Movieguide®: The Family Guide to Movies and Entertainment, announced today that the Kairos Prizes for Spiritually Uplifting Screenplays by Fuirst-Time and Beginning Screenwriters is now accepting submissions for its 7th annual competition.

Supported by a grant from the John Templeton Foundation, the Kairos Prizes award $50,000 to the top three entries.

The winners will be announced at the 20th Anniversary of the Faith & Values Awards Gala and Report to the Entertainment Industry on Friday, Feb. 10, 2012 at the Universal Hilton Hotel near the heart of Hollywood.

An Early Bird Discount of $50 will be given to those who submit their script entries by Sept. 19, 2011. After that, the entry fee will be $80 until the final deadline of Nov. 1, 2011. Criteria for the prizes may be found on the Kairos Prize website at www.kairosprize.com.

“We are thrilled to bring the brightest new voices to Hollywood,” Dr. Baehr said. “And, we are honored by the amazing support the Hollywood community has shown toward the competition, which is now entering its seventh season.”

Since 2006, the Kairos Prizes have celebrated the best new screenplays across the globe that “greatly increase man’s love or understanding of God.”

JOHNNY, written by David M. Anthony and originally titled JOHN, THE REVELATOR, was the inaugural Kairos Grand Prize winner and was released last month on video through Pure Flix Entertainment.

“There are several other winning writers that currently have deals in the pipeline,” Dr. Baehr said. “We look forward to having the opportunity to announce these later in the year as these deals come to fruition.”

In addition to the Kairos Prize, the highlight of the Faith & Values Awards each year is the presentation of the two $100,000 Epiphany Prizes for Inspiring Movies & TV. Also supported by a grant from the John Templeton Foundation, the Epiphany Prizes honor the best movie and best television program of the previous year.