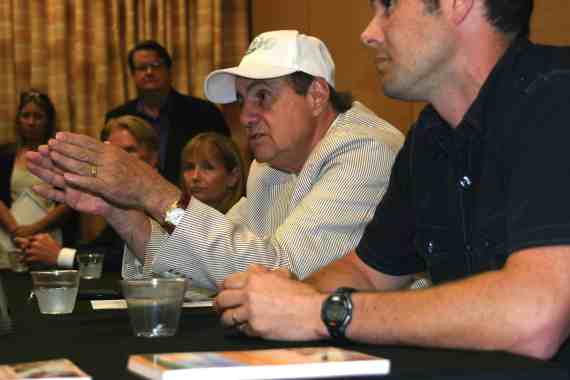 By Melanie Oren and Tom Snyder

Making spiritually uplifting, religious, faith-based movies and television programs with inspiring content and messages can be a professionally and personally rewarding job.

Moderated by Radio and Website Manager Jeff Holder of Movieguide®, which sponsored the event, the panelists gave about 50 aspiring scriptwriters and producers a unique opportunity to hear from a panel of accomplished screenwriters and producers about what it takes to make spiritually uplifting, redemptive, faith-based movies and TV programs.

Among the panelists were writer/producer Jim Britts (TO SAVE A LIFE), writers/producers James Bruner (ICE DREAMS and MISSING IN ACTION) and Elizabeth Stevens (ICE DREAMS), and producer Larry Thompson (AMISH GRACE, LUCY & DESI: BEFORE THE LAUGHTER and LITTLE GIRL LOST).

The two $100,000 Epiphany Prizes are given each year to the best movie and television program that “greatly increases people’s love or understanding of God.”

All four panelists advised the attendees to make their spiritually uplifting, redemptive and faith-based content a part of the story and characters, and not to just tack it onto their story.

“Make it part of the story and part of the character’s journey, someone who overcomes obstacles through spiritual growth,” Bruner said. “You have to care about the main character. If you don’t care, the audience doesn’t care.”

“We always like to flesh out our character’s background,” Stevens added. “A lot of times, the situations will come out of that.”

The panelists discussed their roots, what attracted them to the entertainment industry and how they ended up working in that industry.

“I loved television and movies and music like my mother did,” noted Thompson, who grew up in a very small town in Mississippi called Clarksdale.

“She told me to get an education and get out of there,” he recalled. “She said, ‘This town is nothing but a graveyard with stoplights.’”

So, Larry soon moved out of Mississippi and moved to Los Angeles. He said the first time he saw the Capitol Records building and Hollywood and Vine, he knew he was really home.

“For a year and a half,” he said, “I taught myself the entertainment business.”

Since then, Larry went on to negotiate the breakup of the Beatles, manage the careers of more than 200 stars and produce 19 movies for television, including AMISH GRACE.

A similar, but slightly different, calling took hold of Britts when he found himself writing and producing TO SAVE A LIFE. Making the movie grew out of his work as a youth pastor.

“We’re working with the most hurting generation ever,” he said about his work as a youth pastor. “We set out to make a movie to inspire teenagers.”

Thompson advised the beginning and veteran writers and producers attending the panel to consider the commercial aspects of their story, because someone has to sell the idea to a TV network or a movie studio, then to the public.

“Try to write scripts that encourage people to ask questions,” Britts also suggested. “Does it make people walk out and ask questions?”

“There are no good writers and bad writers,” Thompson added. “There are only good scripts and bad scripts. The good news is that it’s now a level playing field.”

Moderator Jeff Holder agreed, saying that the faith-based market for spiritually uplifting movies and television programs with religious content has a “kaleidoscope” of people involved in it.

“Niche marketing is a very big thing,” he added.

Tom Snyder, editor of Movieguide®, pointed out that Movieguide® encourages filmmakers to put spiritually uplifting, redemptive, faith-based content, some of it very overt, in all their projects, from big productions like the “Spider-Man” movies and “Lord of the Rings” to small movies like “Fireproof” and “Amazing Grace,” and medium-sized movies like the ones Tyler Perry is doing.

All these movies have made some money, he noted.

In fact, Movieguide®’s Annual Report to the Entertainment Industry, now in its 20th year, shows that spiritually uplifting, redemptive, faith-based movies promoting strong Christian, biblical or monotheistic values make the most money on average, year in and year out.

The Epiphany Prizes are supported by a grant from the John Templeton Foundation.