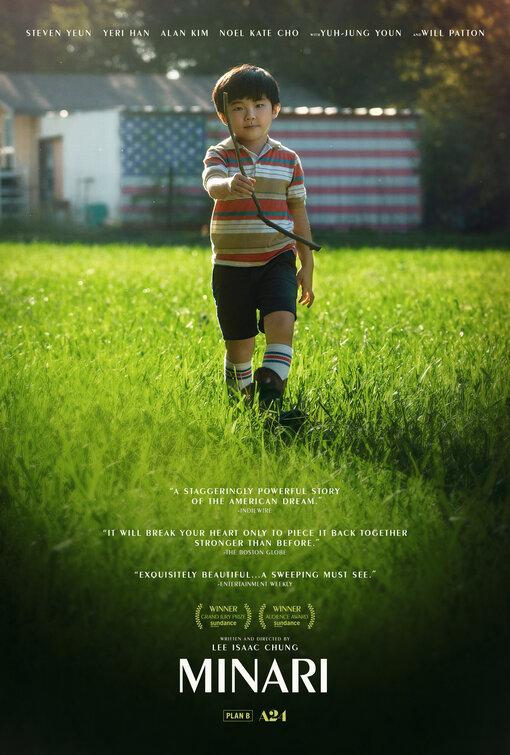 (BB, CC, Ab, Pa, L, V, N, D, MM):
Dominant Worldview and Other Worldview Content/Elements:
Strong moral worldview celebrating family, with some positive Christian references (a quirky but sincere older Christian man considers himself an exorcist and offers prayers for the family in the movie, a few church scenes, Christian pastor makes a brief presentation of the Gospel, some prayers seem to be answered but not totally), but also some father in movie is skeptical of his farmhand’s Pentecostal Christian faith, grandma objects to other’s story to son about seeing Heaven in his dreams, and one Korean woman says Koreans are moving to the country to get away from Korean churches in the city, and one scene with a man using a divining rod to locate water rejects the pagan superstition, but another scene validates it
Foul Language:
Eight obscenities (one “s” word, three or four “bastards,” some “d” words) and one light profanity, plus two teenage boys give an obscene gesture to a man walking with a large wood cross along the road, grandma jokes about boy’s bedwetting problem, saying he has “broken penis,” and the talk switches to “ding dong” when the boy mentions that slang word for penis, and boy gets into trouble when he dumps the Korean herbal concoction his grandma and mother force him to drink and urinates in the cup and gives it to grandma, pretending to her that it’s the Mountain Dew soda drink the family likes (grandma spits it out as soon as she takes a sip and yells at the boy as he runs out the door laughing)
Violence:
A fire consumes a storage shed, two people fight the fire to save some property but have to leave when the smoke gets to be too much, a dresser drawer falls on boy and cuts his leg slightly, father kicks some crates in anger, grandmother watches a couple wrestling matches on TV, little boy has a heart murmur, and grandmother has a stroke but returns home to recover and has to walk with a cane
Sex:
No sex
Nudity:
Upper male nudity in a couple scenes
Alcohol Use:
No alcohol use
Smoking and/or Drug Use and Abuse:
Brief smoking and two boys take a piece of chewing tobacco; and,
Miscellaneous Immorality:
Grandmother secretly takes back a hundred dollar bill her daughter put into a church collection plate, married couple fights about the husband’s dream about being a farmer, wife gives husband an ultimatum, wife tells husband she’s lost faith in him, and their conflict isn’t overtly resolved.

Set in the 1980s, MINARI is an autobiographical drama in Korean and English about a Korean immigrant who moves his family from California to Arkansas to pursue his dream of becoming a farmer, but his wife starts to resent his decision when things prove difficult for them. Despite some slow moments, MINARI sneaks up on the viewer with some very touching and funny pro-family moments, including some positive Christian references, but the conflict between the wife and husband isn’t resolved, there’s some foul language, and the father and grandmother express some skepticism toward a couple religious ideas.

When Jacob Yi moves his wife, Monica, and their two children, Anne and David, to Arkansas, the place with farmland he bought just has a trailer house on it. Monica is especially concerned about their young son, David, who has a heart murmur. She’s worried the hospital is too far away.

While working at the hatchery, they take Anne and David along, but the children are easily bored there. So, Jacob and Monica send for Monica’s mother, Soonja, in California to come be the children’s babysitter. However, when she arrives, Grandma is not what the grandson, David, expected. Soonja can’t cook, not even cookies, and she’s fond of saying the “d” word. David thinks Grandmas are supposed to be sweet and bake cookies for their grandchildren. It doesn’t help matters that Grandma crudely makes fun of David’s bedwetting problem and makes him drink a weird home remedy for his heart condition.

Meanwhile, in between working at the chicken hatchery, Jacob buys a tractor plow to grow Korean vegetables. He reasons that the number of Koreans coming to America every year will make such crops sell like hotcakes. To help him, Jacob hires a quirky but optimistic Pentecostal Christian guy named Paul who fancies himself an exorcist. Paul doesn’t go to church, but drags a large wooden cross along the rural roads as some form of penance. That’s my church, he says. Despite this quirky behavior, it becomes clear that Paul has a good and sincere heart, even though Jacob sometimes rebuffs him when he wants to pray for Jacob, the crops or the family.

Growing the crops seems to go very well, but Jacob has problems getting the water to irrigate his crops. Eventually, the well he built runs dry, and he has to get water from the county, even though he can’t afford it.

While taking care of the children, Grandma encourages David to go on walks with her and even to run. With Anne, Grandma visits the small creek nearby and plants a small crop of minari, a special Korean herb Grandma says is used for cooking and medicinal purposes. Slowly, David starts to warm up to Grandma, especially when she sides with him when Jacob wants to punish David for pulling a mean trick on her. Jacob orders David to get the punishment stick for a spanking, but David accidentally breaks it while trying to retrieve it. Jacob orders David to go outside and get another stick. David goes outside and starts comparing the size of the sticks he finds, to make sure he brings back the smallest stick possible. When he comes back with a really thin reed with plenty of pliability, Grandma laughs and praises David for being so smart. “You’re the winner,” she exclaims.

Things take a turn for the worse for Jacob when a Korean grocer in California reneges on a deal to buy Jacob’s vegetables. Also, Grandma suffers a small stroke. After a brief stint in the hospital, she returns home to recover. However, Monica is now fed up with the whole situation in Arkansas. She doesn’t trust that things will work out for the family in Arkansas and wants to take Grandma and the children back to California. The question is, can Jacob let go of his dream to be a farmer?

Despite a slow, meandering first half, MINARI’s second half picks up as happy and sad events start to impact the Yi family’s story. The story sneaks up on the viewer with some very touching and funny moments like the scene with the stick punishment and emotional scenes between the parents and the little boy and his grandma in the third act. That said, the movie doesn’t resolve the conflict between the parents. So, the ending isn’t totally satisfying. Of course, others might argue that life itself isn’t always satisfying, and MINARI is a slice-of-life sort of movie. Even so, it would have been better if the story had tied up this loose end with the parents. It tied up the story between the grandmother and the little boy in a natural and realistic way, so why not the conflict between the parents? Also, Monica doesn’t seem to be supportive enough to Jacob. She comes across as too unforgiving and hard toward him. As a result, she’s not as sympathetic. For example, in one pivotal scene, she accuses Jacob of caring more about himself than the family, but the same could be said about her.

The performances in MINARI are perfect. Steven Yeun and Yeri Han are outstanding as the parents, but it’s the performances by Youn Yuh Jung as the grandmother and Alan Kim as the little boy that are exceptional. Will Patton also delivers an outstanding performance as Paul. Sadly, the writer/director seems to forget about the character of the daughter (the character of David is based on the director’s experiences as a little boy with his family). So, Noel Cho, who plays the daughter in MINARI, is kind of shortchanged, in MOVIEGUIDE®’s opinion, though she’s the one who’s with the grandma when the grandma discovers the best place to plant the minari seeds.

Thematically, MINARI is an autobiographical celebration of family. The movie also has multiple references to Christianity, which are portrayed in a realistic manner. Despite his quirky behavior, Paul is constantly offering prayers for the Korean family. After the grandmother’s stroke, Monica, the mother, has him come into their house to anoint it with oil and drive out any demonic spirits that might be there. However, the father, Jacob, is skeptical about all this. To him, Paul’s Pentecostal style of Christianity is too strange, even though Paul is totally sincere. In the end, although Paul’s prayers seem to have a positive effect, the family still must face a couple major obstacles and hardships. Eventually, the ending suggests that the Yi family is like the minari that grows by the creek. Despite obstacles, the family will survive, grow and prosper because of the strength of their family ties, the roots that sustain them. So, MINARI’s dominant worldview is more of a morally uplifting, pro-family worldview than an overt Christian one.

MOVIEGUIDE® advises caution for older children because of some foul language, the grandmother’s stroke and crude references to the little boy’s bedwetting problem. There are also a couple scenes with a man who uses a dowsing rod to find water. In one scene, the superstitious practice is rejected, but in the other scene, the practice is validated.