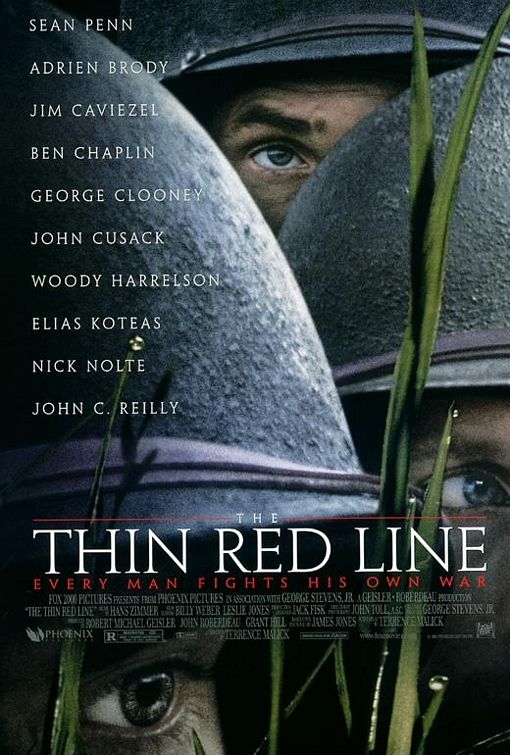 THE THIN RED LINE is a leisurely, lyrical and provocative tale about a group of American soldiers who relieve battle-weary Marines on Guadalcanal Island during World War II. Despite periodic foul language and a few gruesome scenes of violence, the movie has a moral worldview, especially when it focuses on the self-sacrifices some of the men make and the story of a religious army captain who shows Christ-like concern for his men.

Moderately moral worldview with prayers to God, Christ-like behaviors & some minor elements hinting of false religion; 34 obscenities & 27 mostly strong profanities; lots of war violence with a few gory scenes but much less than SAVING PRIVATE RYAN; no sex scenes with adultery, promiscuity or sexual immorality but husband and wife caress, kiss, lie on bed, & married couple undo top button to reveal top of woman's bra; naturalistic upper female nudity among island natives & soldiers skinny dip in ocean while on R&R alcohol use & drunkenness; smoking; and, miscellaneous immorality such as adulterous wife writes Dear John letter, army officer more worried about his career than the lives of his men & sergeant advises soldier always to look out for number one.

THE THIN RED LINE is a leisurely, lyrical, provocative tale about the fight for Guadalcanal Island during World War II. Loosely based on the famous novel by author James Jones, it contains some Christian-friendly content that many people will find refreshing.

The movie stars an ensemble of actors playing a group of American soldiers who relieve battle-weary Marines on the Pacific island. The men engage the Japanese in a desperate battle for small pieces of territory, but the 170-minute movie focuses on three main relationships: 1) the relationship between the first sergeant, Welsh, and an idealistic, philosophical soldier named Witt, who rejoins the outfit after going AWOL; 2) a soldier’s visual memories of his wife; and, 3) the conflict between the outfit’s colonel and its captain, who asks for divine guidance at least two times in the movie.

Writer and director Terrence Malick hasn’t directed a movie since 1978’s DAYS OF HEAVEN. Once again, he juxtaposes the conflicts in and between his characters with the uncaring, quiet harmony of their natural environment. For instance, he intercuts shots of jungle animals and island natives with images of the soldiers fighting and not fighting, while Witt, in narration, says things like “This great evil, where’s it come from? What seed, what root did it grow from? Does our evil benefit the earth? Does it help the grass to grow?”

Another major theme in Malick’s movie is the intense bonds that develop between the men. Welsh, the cynical first sergeant played by Sean Penn, has deep conversations with Witt and a couple of the other men. At an important point in the movie, Witt talks about the brotherhood between the soldiers. Also, the army captain, played by Elias Koteas, shows Christ-like concern for his men. A few of the men thank him for his concern after the colonel, played by Nick Nolte, relieves him of his command and sends him back to the states, with a Silver Star as compensation. The captain graciously acknowledges their thanks and tells them he thinks of them all as his sons. The scenes with the captain are among the best in the movie, as is a rousing assault on a machine-gun nest, led by John Cusack as the colonel’s young exec.

The scenes with the captain also help give the movie a moral worldview, even though Witt sometimes seems to question God’s purpose and at times makes statements bordering on a non-Christian worldview. Not only does the captain show concern for his men, soldiers also sacrifice their lives for each other in a noble manner. Finally, despite Witt’s other statements, at one special moment he seems to ask God, “Look out through my eyes at the things you made, all things shining.”

The acting in this movie is uneven, however. Koteas, Penn, and especially Nolte, stand out, as does Cusack, but Jim Caviezel as Witt and Ben Chaplin as Private Bell, the soldier with the wife, do not seem as memorable, although Witt does have a couple nice moments. Part of the problem is that Caviezel and Chaplin look a lot alike, and some of Witt’s narration seems to occur when Chaplin is onscreen. The movie could have cut out some extraneous characters and some unnecessary scenes, especially near the beginning and near the end, to give its plot, characterizations and themes a tighter focus. The movie also could have eliminated most if not all of its foul language, as well as a few gory, violent scenes and some naturalistic nudity of female islanders, to earn a PG-13. All this is really regrettable because MOVIEGUIDE would have liked to give this movie a better rating, both in terms of quality and acceptability.

Many people will want to know how this movie stacks up against Steven Spielberg’s SAVING PRIVATE RYAN, another World War II movie that has an inside track on this year’s Oscars. THE THIN RED LINE is much less violent, and its strong foul language is not as intrusive. Intellectually and dramatically at times, it is also a deeper, more mature movie with more Christian-friendly characters. RYAN, however, packs a bigger emotional, patriotic wallop that, though slightly superficial and corny at times, is aided by Spielberg’s wonderful storytelling abilities. RYAN also breaks fresher cinematic ground, artistically speaking, especially in the way that it puts the audience right in the action of World War II, as if the audience itself is fighting the war.

Writer: Terrence Malick BASED ON THE NOVEL BY: James Jones