"Celebrating Individuality, Kindness and Helping Others" 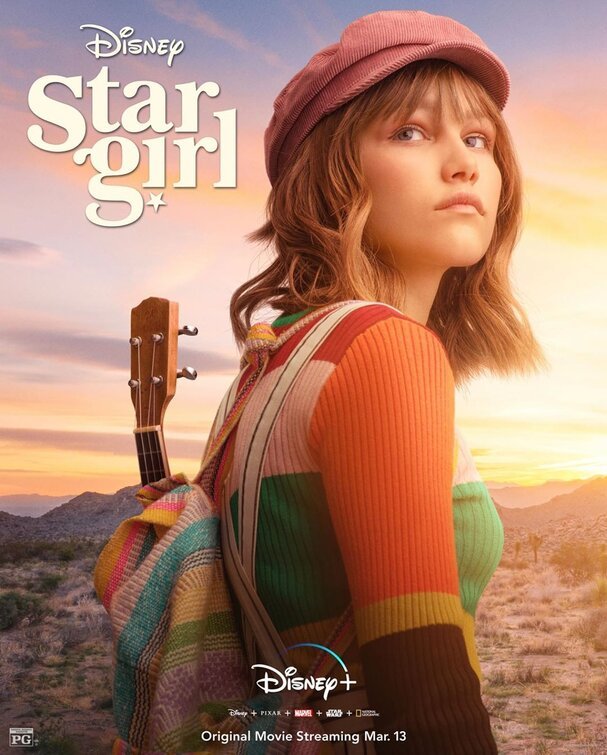 STARGIRL, a movie on Disney+, is a high school romance with some musical numbers. Leo befriends a quirky new girl at school who calls herself Stargirl and is a talented singer. They begin a budding romance, and Leo discovers Stargirl is a secret Good Samaritan, performing acts of kindness for other people. After singing a song during a football game, Stargirl leads the school team to a series of victories. However, things go wrong at the championship game, and the school turns against her. Can Stargirl and Leo fix the situation?

STARGIRL is engaging and touching, with appealing performances. It has a strong moral worldview that promotes doing kind things for other people without expecting anything in return. However, it also has some emotional elements focusing on two teenagers who date for the first time and try to figure out who they are. Also, there’s an implied homosexual character of a girl who dresses like a boy and dances with another girl at a school function. The football games contain some hitting that might scare younger viewers. MOVIEGUIDE® advises caution for children.

STARGIRL, Disney’s new streaming movie, is a teenage romance with a few musical numbers. It follows a quirky girl with a kind heart and a talent for singing and her new boyfriend as they navigate some murky waters in their high school in a small Arizona town.

One day, a teenage boy named Leo encounters a quirky new girl at school who calls herself Stargirl. A talented singer, Stargirl acts as a secret Good Samaritan trying to honor the people around her with acts of kindness, but she doesn’t always know how these random acts will impact the people. So, what started out as a sweet gesture quickly gets convoluted.

STARGIRL has a strong moral worldview but also an implied homosexual character, a girl who dresses as a boy and later dances with another girl. Consequently, MOVIEGUIDE® advises caution for children.

The plot begins with a voiceover from Leo in a flashback when he was a child. Leo details how his father passed away when he was young and how he used to wear one of his father’s old ties every day. However, one day at school some children came and cut his tie in half, making fun of him for wearing it. It was then Leo decided it was easier to blend with the crowd rather then stick out and be different.

Right after the incident as a child, every birthday Leo would receive a new tie on his front door from an anonymous source. He never wore them, but always kept them. The same happens on his 16th birthday.

On the first day of the new school year, during band practice, a quirky new girl shows up at school. The new girl is the talk of the school, because nothing really happens in their school or their small town. Everything is always quiet, the football team never wins any games, and everything stays pretty much the same. Little do Leo and his friends realize the new girl is about to change everything.

Leo’s friend Kevin realizes that Leo has become enthralled with the new girl, who has a talent for singing. At lunch, the girl comes and introduces herself to Leo and his friends as Stargirl. Leo starts quietly following Stargirl and wants to find out more about her.

Cut to the year’s first football game. Right as halftime ends, Stargirl heads to the middle of the field to sing a song for everyone. This pumps up the team and the crowd, so much so that the team wins the game. They start calling Stargirl their “good luck charm.”

The next week at school, Leo follows Stargirl home with the intention to ask her to come on his and Kevin’s TV show, THE HOT SEAT, broadcast throughout the school. Each week, they interview one person, putting them on “the hot seat.” Unhappily for Leo, Stargirl declines to be on the show. However, she does want to hang out with Leo more, which leads to a budding romance between the two. Through this relationship, Leo learns Stargirl is the person leaving the ties on his doorstep. She also performs other acts of kindness for people without them knowing her identity.

As the school year continues, Leo and Stargirl date and go to weekly Friday night football games where the team continues to win. At the end of the season, the football team finds themselves in the championship game with the game on the line. However, when a player on the other team gets hurt, Stargirl goes to comfort him and leaves to go to the hospital. The team ends up losing, and everyone turns against Stargirl.

As the tide turns, Leo encourages Stargirl to be more normal, so she does. In an effort to get the school back on her side, Stargirl agrees to go on Leo and Kevin’s show. However, when she does, it backfires and finds out some of the good deeds she thought she was doing for others didn’t turn out that good.

Will Leo and Stargirl sort out their issues? Will Stargirl realize her mistakes and unite the school once more?

STARGIRL is engaging, touching and well produced, with great acting and little to distract viewers from the story. Positively, the movie highlights how anonymous acts of kindness can impact other people’s lives, but also shows that sometimes people need the full picture before doing something they think is kind, because sometimes the things they do cause pain, despite their intentions. The movie also promotes good wisdom and adult figures mentoring teenagers. Finally, it has a couple fun musical numbers that add some extra fun.

STARGIRL has a strong moral worldview as it promotes kindness and doing things for others without expecting things in return. The movie also has emotional elements as two young people date for the first time and try to figure out who they are as people. However, there is an implied homosexual character of a girl who dresses like a boy and is seen dancing with another girl at a school function. Also, the football games in STARGIRL contain some hitting, blocking and tackling that might scare young children. So, MOVIEGUIDE® advises caution for children.