"Jesus Will Save You" 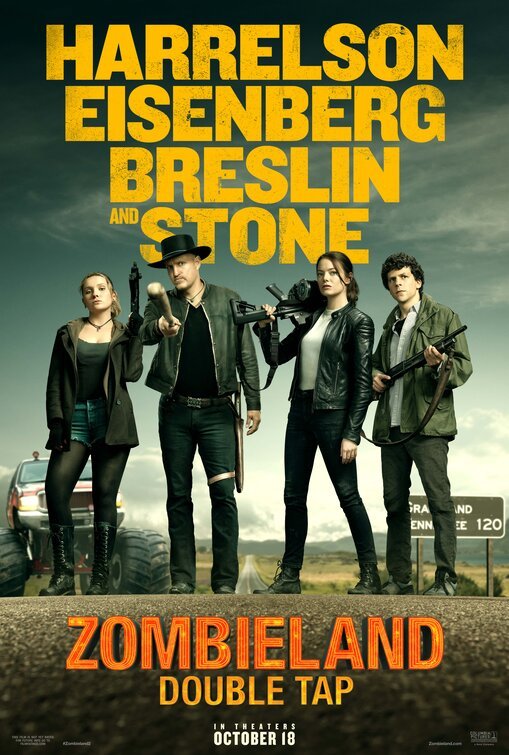 ZOMBIELAND:  DOUBLE TAP picks up 10 years after the first horror-comedy. Columbus, Little Rock, Wichita, and Tallahassee each named after their hometowns, have improved on their ace zombie-killing skills during the decade of living in a post-apocalyptic America. They’ve also been able to live a relatively blissful and safe life by taking over a long-abandoned White House and enjoying a funny form of family life together. The makeshift family splits up when Little Rock turns 21 and runs away with a hippie musician. Little Rock’s sister, Wichita, convinces Tallahassee to race against time to save Little Rock from an uncertain fate.

ZOMBIELAND:  DOUBLE TAP provides another round of traveling comic mayhem, combined with entertaining character interactions. It has a strong moral worldview with overt Christian references and a strong pro-gun message. The movie includes references to Christmas, a couple of Christmas carols and a road sign saying, “Jesus Will Save You.” However, ZOMBIELAND:  DOUBLE TAP contains lots of strong foul language and extreme violence, a casual attitude toward premarital sex, and a comical reference to marijuana use; so, extreme caution is advised.

(BB, CC, PPP, FR, Pa, LLL, VVV, S, A, DD, M):
Dominant Worldview and Other Worldview Content/Elements:
Strong moral worldview with some overt Christian elements promotes marriage, family and self-sacrifice and with a very strong message supporting the right to bear arms and the second Amendment, marred by some Antinomian, lawless, pagan elements
Foul Language:
At least, 58 obscenities (including many “f” words), three strong profanities and two light profanities
Violence:
Frequent zombie-killing violence, using guns, fire, explosions, bludgeoning, stabbings, and other traumatic methods, all with profuse bloodletting but also played for laughs as well as scares
Sex:
Implied fornication and cohabitation, and several sexual innuendoes between two men fighting over a woman about who gets to “use her driveway”
Nudity:
No nudity
Alcohol Use:
The older male lead is seen with whiskey bottles several times, either taking a swig or implying he drinks heavily
Smoking and/or Drug Use and Abuse:
No smoking but comical references to implied marijuana use when 21-year-old woman runs off with a hippie musician, who produces a giant bag of marijuana when he learns she’s always wanted to smoke marijuana, and she smiles; and,
Miscellaneous Immorality:
Characters take what they want to survive and a woman says she has a way “to get around Jesus,” but she’s depicted as dumb.

The sequel to the 2009 hit horror comedy, ZOMBIELAND: DOUBLE TAP reunites its impressive cast of four Oscar-nominee leads for another wild adventure battling the undead as they try to find and save the youngest girl of the group after she runs away with a new boyfriend. It has a somewhat moral worldview with a message of helping others through self-sacrifice in addition to pro-marriage and family elements, a strongly positive view of guns as a means of self-defense, use of a couple of Christian music hymns, and a surprisingly direct shot of a road sign that says “Jesus Will Save You.” On the other hand, it has constant graphic albeit comical violence, lots of foul language, a casual attitude toward premarital sex, and positive references to marijuana usage.

The movie starts off fast, with Columbus (Jesse Eisenberg) providing the archly comic narration that propelled the first movie. He explains that the lead foursome, the de facto family of friends consisting of himself, Little Rock (Abigail Breslin), Wichita (Emma Stone) and Tallahassee (Woody Harrelson), each named after their hometowns, have improved on their ace zombie-killing skills during the past decade of living in a post-apocalyptic America.

They’ve also been able to live a relatively blissful and safe life by taking over a long-abandoned White House and enjoying a funny form of family life together. Columbus and Wichita have long been a couple. However, Tallahassee, the battle-hardened, mercenary-style father figure to the three younger members, has given up on finding love. Meanwhile, the youngest, Little Rock, has turned 21 without ever having had a boyfriend and is getting restless.

When Columbus proposes marriage to Wichita, she at first is scared by the prospect, saying that all she ever knows about marriage is that it leads to divorce. She disappears by morning with Little Rock, who’s her sister, and the two soon run into a young hippie musician named Berkeley, who immediately woos a fast-smitten Little Rock.

Little Rock and Berkeley soon escape together, heading for what Wichita believes is Graceland while leaving Wichita behind. In the month that she was gone, Columbus has taken up with a dumb blonde named Madison (Zoey Deutch). When Wichita convinces Tallahassee to race against time to save Little Rock from an uncertain fate with the unknown Berkeley, an extra level of comic tension between the two women adds to the fun.

They believe that Little Rock and Berkeley are heading for Elvis Presley’s former estate at Graceland, but things are not what they appear to be, and instead the couple are heading for a hippie commune called Babylon much further West, setting themselves up for great danger from a new, more indestructible mutation of zombies.

ZOMBIELAND: DOUBLE TAP has impressively kept its Oscar-nominated cast together, as they show their willingness to have fun even as many of their award-nominated contemporaries ruin their careers by only pursuing pretentious acting jobs. All four of them are having a blast (pun intended) as they engage in another round of traveling comic mayhem, combined with entertaining character interactions where each well-drawn character plays perfectly against each star’s image.

That said, there’s a little bit of seen-it-before feeling in this film, after the incredibly original spirit of the initial ZOMBIELAND a decade before. The new movie also lacks the tremendous surprise of having Bill Murray playing himself as a zombie-apocalypse survivor, in one of the greatest cameos in movie history, during the first movie.

The movie has tremendous amounts of violence and bloodshed. However, Director Ruben Fleischer and his three scriptwriters take a comic approach to their subject. In fact, they have an impressive mastery of keeping the action ridiculously over the top in such an entertaining way that it’s hard not to laugh.

ZOMBIELAND: DOUBLE TAP has a strong moral worldview with overt Christian references and a strong pro-gun message. The movie includes references to Christmas, a couple Christmas carols and a road sign saying, “Jesus Will Save You.”

Besides the extreme violence, however, ZOMBIELAND: DOUBLE TAP contains lots of strong foul language, a casual attitude toward premarital sex, and a comical reference to marijuana use. So, extreme caution is advised.