I WANT YOU BACK

"All’s Fair in Love and War" 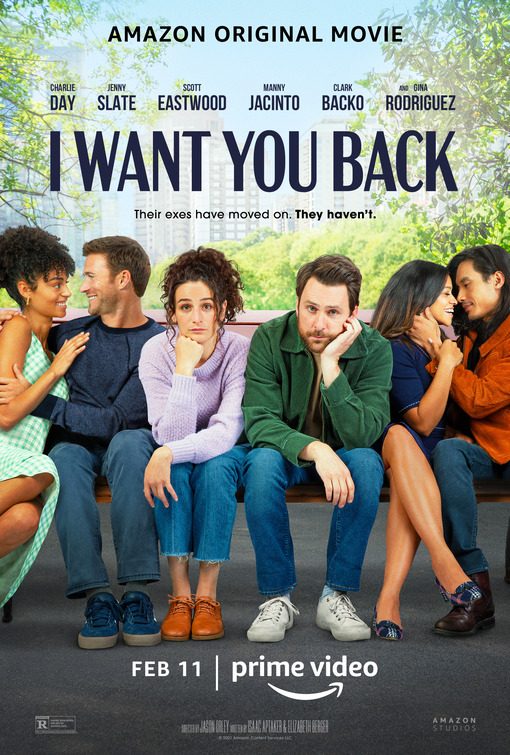 I WANT YOU BACK is a sophomoric, raunchy movie about two thirtysomethings, Emma and Peter, who meet after they are dumped. They decide to help each other win their former paramours back, by breaking up their new romantic relationships. Emma commits to breaking up Peter’s ex and her new boyfriend. Meanwhile, Peter devises an underhanded plan to break up Emma’s ex and his new girlfriend. Their plans include debauchery, drugs, sex, and lies.

I WANT YOU BACK has some funny moments and good chemistry between the actors. However, the plot is slow-moving and sometimes jumps, making the script feel like it’s patch-quilted together. The lies and deceitful measures eventually blow up in the lead characters’ faces, but the movie contains lots of immoral lewd content. It also has some homosexual, bi-sexual behavior. Despite some moral, redemptive content, the movie is wrought with moral relativism. Sexually immoral behavior is never challenged. Rather, the movie takes a morally relative tone, with people saying, “It just isn’t meant to be” or “This behavior isn’t right for me.” I WANT YOU BACK is abhorrent and unacceptable.

I WANT YOU BACK is a predictable, morally bankrupt movie about two thirtysomethings who meet after they are dumped by the loves of their lives. The jilted lovers discover their loves have moved on to other romantic relationships. They conspire to help each other break up the new relationships and win their significant others back at all costs.

Emma and Peter are dumped on the same weekend. They meet each other in their office building when they both “ugly cry” in the stairwell. The broken-hearted duo quickly form an alliance where they call themselves the “sadness sisters.” Emma’s ex, Noah, has found a new love, Ginny. Peter’s ex, Anne, has fallen for the Drama teacher, Logan, at the school where she’s an English teacher.

Emma and Peter decide they can’t let go. They hatch a plan to win back their true loves by breaking up their former paramours’ new relationships. Emma volunteers for the school’s musical with the intent to seduce Logan, causing Anne to run back to Peter. Peter befriends Noah, with the intent to convince him to break up with Ginny, so that he will go back to Emma. So they hope.

A problematic theme throughout the movie is, what they claim is boring and uptight, is actually stable and life-affirming. Nefarious and immoral activities are a product of irrational thinking, or insanity.

Meanwhile, Peter convinces Noah to be his “wingman” at a wild night club. The two get drunk and go home with women, who are later revealed to be 17-year-old girls. At the home party, the otherwise boring Peter takes Ecstasy, drinks more alcohol and jumps out of a second story window into a hot tub. The drug-peppered party is busted up by the girl’s father. Peter and Noah run for their lives.

Peter’s plan backfires when Noah realizes he no longer wants to participate in sophomoric nonsense. He wants a meaningful relationship with a wife and children. Making matters worse for Emma, Noah proposes marriage to his new love, Ginny, and she accepts.

The viewer wonders, more than once, if the main characters were dumped for good reasons. The male lead is promoted as sincere and caring. However, he is also weak and has no moral compass. The female lead has no problem with her abhorrent behavior. There is some redemptive content, including the desire to find the right partner in life, family and some positive messages about sincerity. Perhaps what the main characters thought they wanted isn’t what they wanted after all.

I WANT YOU BACK is well-acted, with good chemistry between the main characters. There are also some funny moments. However, the movie is slow-moving and sometimes jumps, making the script feel like it’s patch-quilted together. The lies and deceitful measures eventually blow up in the lead characters’ faces, but the movie contains a lot of sexual content, including homosexual and bi-sexual content. I WANT YOU BACK also contains a main character who coerces a woman into having a “threesome,” and excessive vulgarity, including more than a dozen “f” words, none of which is rebuked. The movie is wrought with moral relativism. Sexually immoral behavior is never challenged. Rather, the movie takes a morally relative tone, with people saying, “It just isn’t meant to be” or “This behavior isn’t right for me.” I WANT YOU BACK is abhorrent and unacceptable.

The two jilted lovers deceive and “claw” to get what they want.