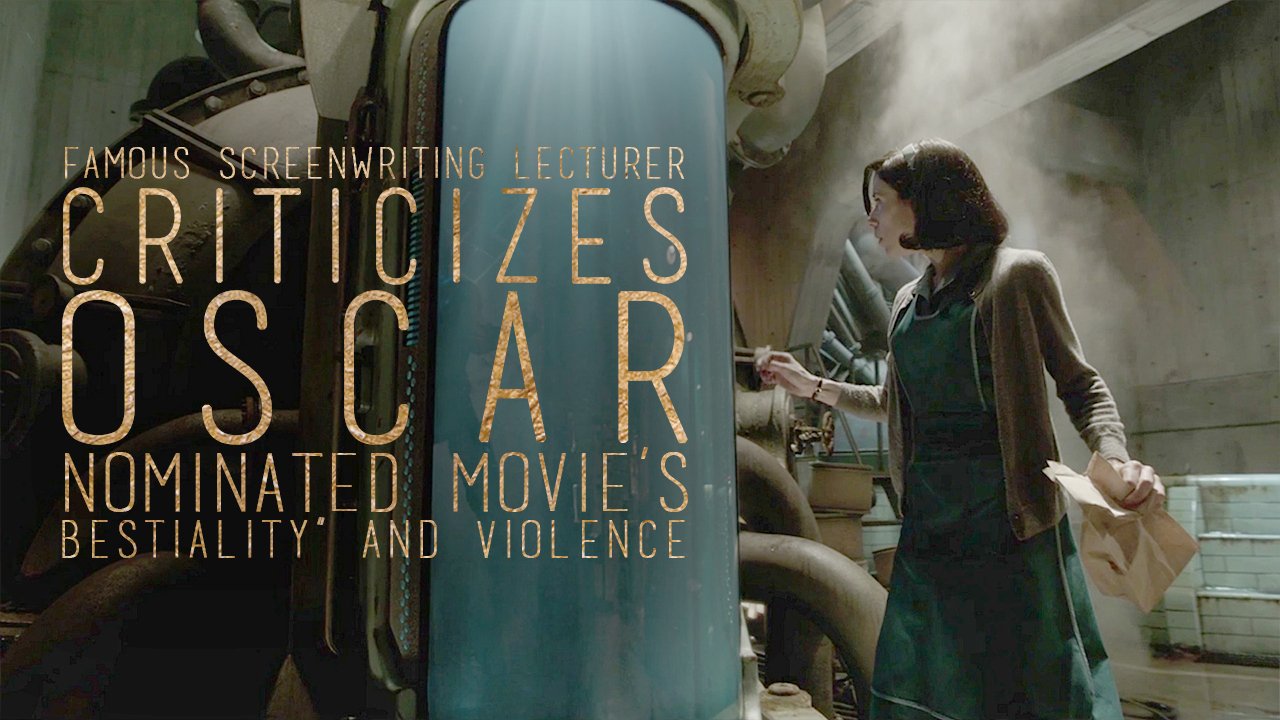 Acclaimed Director Guillermo del Toro received near universal praise for his violent romantic fantasy SHAPE OF WATER, which garnered 13 Academy Award nominations, including Best Picture, Best Director, Best Actress, and many more, as well as a nomination from GLAAD. The movie is about a mute janitor woman named Elisa who falls in love with an amphibious creature being studied by scientists and the American military in the 1960’s. Critics have showered the movie with praise, but at least one well known secular screenwriting author and lecturer is criticizing the movie.

Robert McKee, author of the book Story: Substance, Structure, Style and the Principles of Screenwriting started off his critique of SHAPE OF WATER, stating, “From world-revered filmmakers like del Toro, we expect a degree of honesty, so my first problem with his film is its mawkish treatment of violence.” The author, who has taught filmmakers like John Cleese, William Goldman and many Pixar filmmakers continued, “At climax, for example, a cartoonish villain blasts a bullet into the heart of the ultra-innocent Amazon Amphibian. The creature then simply reaches up and swipes the bullet wound away, instantly healed. Turns out, this seemingly helpless victim has god-like powers of immortality. That’s sentimentality so syrupy it’d make Hitler blush.” That final scene McKee references is only one of the many grotesque and pointless violent scenes in which SHAPE OF WATER revels.

McKee continues his critique of the movie by pointing out gaping plot holes, as well as the problem with filmmakers presenting movies like SHAPE OF WATER as “Art Films” instead of Genre Films. In a scathing statement, McKee writes that the movie, “gathers a collection of hip social issues ranging from political, military, and sexual tyranny to racial and disabled prejudice. The film, of course, offers no insight into solutions for these problems because art movies never do. They don’t want to change the world; they want to collect awards.”

Finally, McKee accuses the movie (with colorful language) of being a “male sex fantasy” complete with bestiality. The movie is clearly an ethical mess, but this final, and most potent point of bestiality, is what baffles the most. As mentioned above, the main character Elisa falls in love with the amphibious man-like beast, though it’s worth noting it’s more beast than man (at one point it bites the head off of a living cat). Through the course of the movie, Elisa teaches the beast very basic sign language, since she herself is mute.

Del Toro has already established that Elisa is a sexual woman, so when Elisa gets her chance to consummate her relationship with the saltwater beast, she does, and, somehow, this isn’t weird. Mainstream critics gloss over the woman/beast relationship, but with all the recent sexual abuse allegations and the #MeToo movement, what’s also baffling is that no secular film critic seemed to notice that the beast never consented to sex with Elisa. Even if the beast was more human than animal, it has the intelligence and communication of a small child. There’s no way Elisa taught the beast enough ASL to get consent to engage in sexual intercourse. This just goes to show that the progressive “morality” that many in Hollywood are preaching only applies to their own desires or lusts. What’s most disturbing is that these messages of sexual deviance are celebrated as “art.”

McKee wraps up his critique of SHAPE OF WATER by stating, “As we all know too often and too well, there’s no guarantee of art in an Art Film.”