BOOKGUIDE: ISLAM VS. THE UNITED STATES 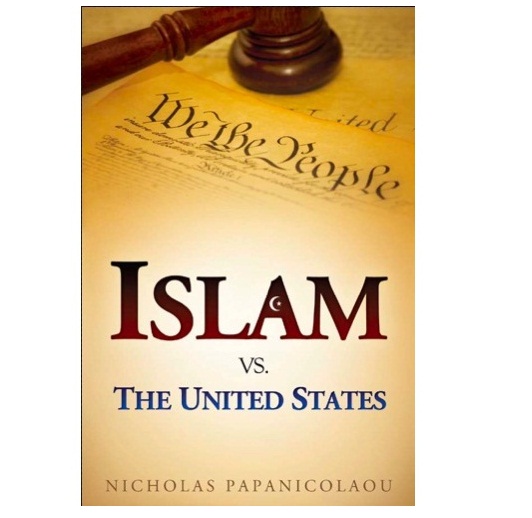 REVIEW:  There have been many books written lately exposing the fallacious theology of Islam and its radical jihad against all other beliefs. Nicholas Papanicolaou’s book is a brilliant, clear, easy to read overview of the history and current advance of Islam.

The chapter on the historical struggle between Christianity and Islam supplies an important correction to the false revisionist history being taught today. Nicholas gives great insight into the U.S. Constitution and his extensive notes provide important information about Islam. He also explains the fundamental differences and divergences between the Good News of Jesus Christ and the bad news of Mohammad. Even better than that, Nicholas gives a playbook for what can be done to solve the problem.

Generals, ministers, and ex-Muslims have commended this book. Movieguide urges you to read it. It’s only 135 pages and may help you become a part of the solution to the radical jihad agenda.

SURAS  re  the  INFIDEL

SURA 2:187: And kill them wherever ye shall find them, and eject them from whatever

place they have ejected you.

SURA 2:191: Kill the disbelievers (non Muslims) wherever you find them

SURA 8:12  (Medina, 88th): I will cast terror into the hearts of those who disbelieve

(Islam). Therefore, strike off their heads.

case take no friends or helpers from their ranks.

peace, you may kill the idol worshippers when you encounter them punish

them, and resist every move they make.

SURA 9:14: You shall fight them, for God will punish them at your hands, humiliate

them, grant you victory over them, and cool the chests of the believers.

SURA 9:29: Make war upon such of those to whom the Scriptures have been given as

believe not in God, or in the Last Day, and who forbid not what God and

His Apostle (Mohammed) have forbidden.

SURA 5:60: Let me tell you who are worse in the sight of God: those who are

monkeys and pigs, and the idol worshippers.

HADITH vol. 9:50: No Muslim should be killed for killing a Kafir (non-believer).

the messengers before him..

SURA 5: 73: Pagans indeed are they who say that God is part of a trinity

Sura 5:48 (Medina, 112th): Then we revealed to you this scripture, truthfully, confirming

previous scriptures and superceding them

SURA 5:101: O you who believe, do not ask about matters which, if revealed to you

prematurely would hurt you.

their affair. Some said “construct a building over them” (ie the non-

believers). But their Lord knows best about them: those who prevailed over

their affair said “Let us surely build a place of worship over them”.

Al-Suyuti (d. 1505): Each time we sleep with a Houri we find her a virgin. Besides, the penis of the Elected never softens. The erection is eternal; the sensation that you feel each time you make love is utterly delicious and out of this world, and were you to experience it in this world you would faint. Each chosen one will marry seventy Houris…”