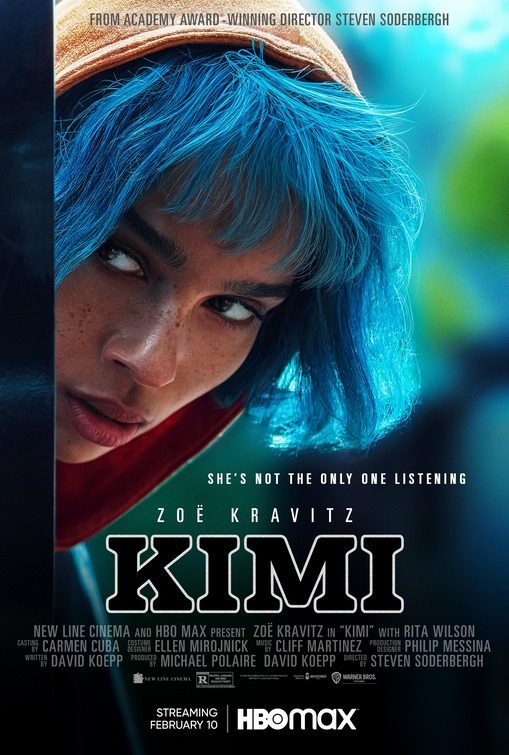 KIMI is an intense thriller on HBO Max. Angela Childs is a tech worker with agoraphobia who finds recorded evidence of two hired assassins killing the mistress of her company’s married CEO. This forces her to leave her apartment to seek justice. However, the lead hitman connected to the two killers tracks Angela’s movements as she tries to contact the FBI. The CEO pays them to kidnap Angela and make her murder look like a burglary gone wrong.

KIMI is a captivating thriller with a slam-bang ending, fine direction and excellent acting. The movie’s climax will have viewers on the edge of their seats. Also, the story’s resolution is incredibly satisfying. KIMI has a strong moral worldview. For example, the heroine is smart, resourceful and courageous. She tries to do the right thing by getting justice for the victim. Also, the movie is pro-liberty and has some excellent warnings about the surveillance state that big companies are creating to stifle our freedoms. Sadly, however, KIMI has lots of strong, gratuitous foul language, a bedroom scene and brief nudity. MOVIEGUIDE advises extreme caution.

(BB, C, PP, H, Pa, LLL, VV, SS, NN, AA, MM):
Dominant Worldview and Other Worldview Content/Elements:
Strong moral worldview, with light redemptive elements, where heroine overhears a woman screaming and being murdered through an Alexa-style device and tries to do the right thing by getting justice for the victim, plus protestors save woman from being kidnapped, a neighbor risks his life to help heroine escape from murderous thugs, and the movie has some excellent warnings about the surveillance state that big companies are creating in the United States and around the world that threaten our liberty, so the movie is pro-liberty, a key Pro-American concept, mitigated by some humanist, pagan behavior by the villains, who will stop at nothing, including murder, with no regrets, and by heroine who doesn’t seek God or Jesus for strength or comfort, but relies on medication and herself
Foul Language:
34 obscenities (including about 19 “f’ words), one Jesus profanity, one GD profanity, and three light exclamatory profanities
Violence:
Strong violence with some blood includes woman is beaten and her throat slit, but the blood around her neck is obscured from view, man stabbed in stomach, and he has bloody hands from putting pressure on the wound, man viciously slaps heroine, men try to grab woman and put her in van, but protestors help her, and she runs away, man, and woman come up to heroine and drug her with a needle to take her to her apartment to kill her, heroine is chased, man shoots gun at heroine, several people killed by a nail gun, woman claims her married boyfriend raped her, and he hires two men through a third man to kill her
Sex:
Partially depicted scene of fornication, and a woman on a recording accuses her rich married boyfriend of raping her, light voyeurism when one man spies on girl from across the street with binoculars, married head villain is clearly having an affair with an unmarried woman, and he decides to get rid of her, and it’s revealed that the heroine herself was sexually assaulted in the past, and that’s why she developed her agoraphobia
Nudity:
Upper female nudity as camera from behind shows heroine in panties getting up from sex to put on a thin T-shirt which shows the form of her breasts, upper male nudity as man lays in bed, while girlfriend puts on T-shirt and get something to drink
Alcohol Use:
A few characters drink a beer while at work, and one employee is clearly drunk while working from home when heroine calls him on her laptop’s video phone (he drinks about three shots of vodka as they talk)
Smoking and/or Drug Use and Abuse:
No smoking or illegal, hallucinogenic drugs, but one killer and his female accomplice drug heroine to take her somewhere to kill her; Miscellaneous Immortality: Kidnapping, murder for hire, threats, heroine takes pills for her anxiety and depression, and married CEO of tech company pays to have heroine followed, kidnapped and killed and for recordings of fight with his mistress and her subsequent murder to be erased.

KIMI is an intense thriller on HBO Max about a woman, Angela Childs, and her life during the pandemic. She lives alone in an apartment in Seattle and is extremely agoraphobic. Lonely and longing for human connection, she spends the bulk of her days working or watching various people outside her window. One person she’s developed a relationship with is a man who lives across the street, Terry. Angela invites him over, and they fornicate. Terry earnestly wants to take Angela on a date, but she refuses. Instead, she immediately starts washing her bed sheets, practicing extra caution during the pandemic. Terry, rejected again about trying to have an actual date with Angela, leaves her apartment.

Angela returns to her dismal life. She wallows through life in a depressed manner, and it’s clear she’s struggling. Through a conversation with a co-worker, viewers learn Angela has some mental health challenges. Several pills in her bathroom support this claim. Every day, Angela takes a few pills. Some of them are to stop the pain of a terrible toothache, but the others appear to be for her agoraphobia and depression.

Angela spends the bulk of her days at her computer, working for a tech company called Amygdala, which is releasing a new Alexa-type device called Kimi. Angela has her own Kimi system in her apartment. Her computer job with the company is to correct problems in communication with Kimi customers. She makes notes on the problems to resolve them, so that Kimi can use the information to better communicate with its customers in the future. The CEO of Angela’s company, Brad Hasling, is planning to take the company on Wall Street, so he has a huge financial stake in making sure the Initial Public Offering goes smoothly.

One day, Angela hears a terribly disturbing recording of a woman struggling and screaming. She downloads the soundbite and does some coding to make out the actual voices. It appears that the woman may be being sexually assaulted. It’s about this point that viewers learn that the reason Angela has withdrawn from the world is not just the COVID pandemic. She herself was assaulted in the last year or so.

Angela reports the recording to her boss, but he’s no help. He encourages her to delete it, because it will be more trouble for Angela than she wants. Angela refuses, however. So, her boss passes on the name of an executive in the company, Natalie Chowdhury, to help Angela.

When Angela calls, Natalie is out of her office, however. Angela leaves her name for the secretary to have Natalie call her. Meanwhile, Angela contacts a company hacker in Eastern Europe, Darius, to help her get the name of the woman on the recording. Darius is drunk when Angela calls him, but he tells her not only can he get the name of the woman, but he can also get the woman’s device number and access all her Kimi recordings.

Angela does just that. She hears the full recording of the scream call. In it, the woman, whose name is Samantha, is having a fight with her married boyfriend, who happens to be Brad, the CEO of Angela’s company. Samantha orders her Kimi device to start recording when Brad knocks on her door. She accuses Brad of raping her. He denies it, but she tells him she’s going to report him.

The next recording is a recording of Samantha being murdered by two thugs that Brad hired through a third man maned Rivas. The recording totally shocks Angela. At just that moment, Natalie startles Angela by calling back and asking her to bring the original recording. She assures Angela that, after meeting with her, they will both call the FBI together. The FBI, not local police, has jurisdiction over crimes occurring through public communications utilities.

Determined to help bring justice to Samantha, Angela fights her agoraphobic fears and leaves her apartment to meet Natalie. However, the CEO’s henchman, Rivas, has tracked the fact that Angela has hacked into Samantha’s Kimi recordings. He convinces Brad, the CEO, to give him money to hire a brilliant hacker who can track Angela’s movements, even when her phone is off the line. Working with the hacker, Rivas sends his two assassins for hire to kidnap Angela, take her to her apartment and kill her, making it look like a burglary gone wrong.

KIMI is a captivating thriller with a slam-bang ending. There’s a slow buildup to the third act, but it’s fairly engrossing and leads to a wonderful turning point in the story. The movie’s climax will leave viewers on the edge of their seats. Also, the story’s resolution is incredibly satisfying.

Zoë Kravitz does an excellent job as the anxiety-ridden heroine, Angela. It’s easy to root for her character. One of the most interesting parts of her performance is when she finally ventures outside to travel across the city to meet with the female executive about the recordings. She wears a hoodie, keeps her head down and walks really fast to avoid any human contact. The anxiety she depicts in these scenes is clearly evident. The supporting cast also does an excellent job. Their performances fit in extremely well with the script and how the plot unfolds.

It’s clear that none of this would have been as effective without the sure hand of veteran director Steven Soderbergh, who’s made several highly effective thrillers in the last 25 years. Soderbergh’s direction in KIMI is among the best he’s ever done. The movie has the tone of PANIC ROOM and a setup like REAR WINDOW with Jimmy Stewart and Grace Kelly and THE CONVERSATION with Gene Hackman.

KIMI has a strong moral worldview. For example, the heroine tries to do the right thing by getting justice for the victim. Her attempt puts a target on her back, but she’s very smart and resourceful when the chips are down. Also, her neighbor risks his own life to help her escape the murderous thugs. Finally, KIMI has some excellent warnings about the surveillance state that big companies are creating in the United States and around the world and that threaten our liberty. So, the movie is pro-liberty.

Sadly, though, the movie’s moral worldview is mitigated by lots of strong, gratuitous foul language, a bedroom scene and brief nudity. Deleting all this or most of it would make KIMI a more acceptable thriller for teenagers as well as adults. As it stands, however, MOVIEGUIDE® advises extreme caution for mature viewers.