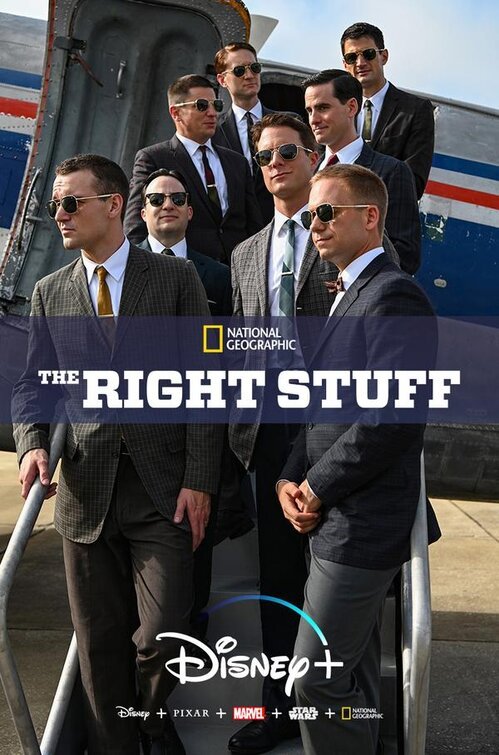 “Sierra Hotel” is the first episode of the Disney Plus [Disney+] television series THE RIGHT STUFF, based on Tom Wolfe’s acclaimed 1979 book. In the episode, NASA searches for the most qualified military test pilots to become the first American astronauts into outer space. In the search, 108 pilots complete a series of strenuous tests for physical stamina, mental strength, motion tests, and overall health. After the tests in 1959, NASA publicly announces seven astronauts as the best of the best. They decide these men have “the right stuff.”

The RIGHT STUFF series is based on the true events of the seven original American astronauts. The episode “Sierra Hotel” is intense and engaging. The episode extols family, friendship and patriotism. Positive parenting is displayed, two men form friendships, and American military men are shown to be talented and courageous. However, these positive messages are tarnished by foul language, crude humor and adultery. The episode also contains implied sex and drunkenness. THE RIGHT STUFF: Sierra Hotel may be interesting for some, but some content isn’t suitable for children. MOVIEGUIDE® advises extreme caution.

(BB, C, PP, Ab, LL, S, N, V, D, A, MM):
Dominant Worldview and Other Worldview Content/Elements:
Strong moral elements with some overt Christian elements and strong patriotic content displays friendship, ambition, family, patriotism, a pastor reads Scripture at a funeral, two men form friendship bonds, and multiple families spend quality time together and celebrate, and American military men are talented and courageous, but there’s some strong immoral behavior
Foul Language:
10 obscenities (including three “s” words), one light profanity, man is shown vomiting, and other crude or vulgar language such as “giggle stick” and “paint my pecker”
Violence:
A plane crashes, but the pilot’s death isn’t shown
Sex:
Implied sex includes a man and woman are shown in bed together naked and adultery
Nudity:
Upper male nudity and a woman’s nude back is shown
Alcohol Use:
Adults drink hard liquor, and drunkenness is depicted
Smoking and/or Drug Use and Abuse:
Adults shown smoking cigarettes; and,
Miscellaneous Immorality:
Lying, cheating and idolatry (a man describes a woman as “a god”).

“Sierra Hotel,” the first episode of the Disney Plus [Disney+] television series THE RIGHT STUFF, a series of trial tests and fierce competition between 108 test pilots helps NASA pick the seven Mercury astronauts who will be the first Americans to venture into outer space. Based on Tom Wolfe’s book, the “Sierra Hotel” episode of THE RIGHT STUFF is suspenseful and keeps viewers engaged, but the episode’s patriotic promotion of achievement, friendship and family is overshadowed by foul language, nudity, crude humor, alcohol use, and adultery.

The episode opens with two of the original seven astronauts, Alan Shepard and John Glenn, arguing before their launch into space. Following this scene, the time jumps back to 1959 where two officials at Nasa prepare a list of the top test pilots for the first space mission. Although the men come from a variety of backgrounds and values, the one thing they have in common is that they’re the best at what they do.

One afternoon, when Shepard is drinking alone at a bar, three fellow pilots ask him if he is going to the “secret meeting.” Shepard, thinking he’s been left out, storms into his office furiously. However, he finds out that another coworker has misplaced his letter. He arrives at the meeting two hours late just in time to find out that seven astronauts will be chosen to go on the first space expedition.

This episode is suspenseful and engaging. The late 1950s and early 1960s décor embodies the time period. It makes viewers feel like they traveled back in time. Moreover, the costumes and music add to the ambiance of the “Space Race” years.

“Sierra Hotel” is exciting to watch and keeps viewers on the edge of their seats. Also, traits of family, friendship and patriotism are shown throughout the episode. For example, parenting is displayed, two men form friendship bonds, and there is military support in the episode. However, the positive messages are tarnished by foul language, nudity, crude humor, and adultery. In addition, there’s implied sex and drunkenness. This episode may be interesting to some adults, but the content isn’t suitable for children. MOVIEGUIDE® advises extreme caution. See the CONTENT section for more details.